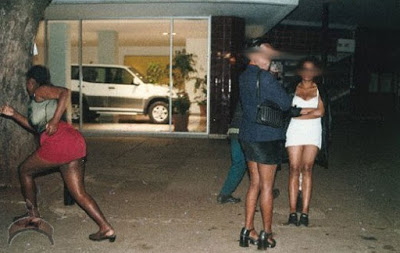 A brothel operator named Olayode Samuel has been killed by those
believed to be prostitutes who later went away with his pension. The
attack, which occured in Odo Owa community, Ijero Local Government Area
of Ekiti State, has left the town mourning the death of a man loved for
his openness and kindness. According to eye witness reports, the
assailants tied their victim, also a retired soldier, to a steel bed
before setting him on fire. Findings by the police revealed the victim
was attacked by prostitutes to whom the deceased rented out the rooms of
his house for use as a brothel.

The state Police Command’s spokesperson, Alberto Adeyemi, confirmed
the incident, saying he (Samuel) was attacked by “women of easy virtue
that rented some rooms from him”. He said: “The man just collected his
pension and thrifts which the prostitutes became aware of. They
dispossessed him of the money and tied him to a bed in the house.
Neighbours were not aware of this until his body started decomposing. We
are on the trail of the suspects and would ensure they are brought to
justice.”

In another development,tragedy struck yesterday in Lagos and Ekiti
States when five persons, including a pregnant woman, lost their lives
in two separate road accidents in the two states. While the pregnant
woman and one other died in Lagos State, eight others, aside from the
three that died in Ekiti State, sustained varying degree of injuries.

Saturday Telegraph learnt that the commercial bus popularly known as
Danfo in which two persons died reportedly lost control before bursting
into flame, killing the pregnant woman and one other female passenger
with many others injured. It was also gathered that the commercial bus
with registration number KTU 479 XQ was coming from Yaba at top speed
when it lost control after hitting a Jeep at the Cane Village, Maryland,
before it fell on its side and caught fire immediately.
Eye witnesses’ accounts said the tragic incident occurred at 2.55pm
while the two women, including the pregnant woman, were burnt beyond
recognition. Five persons were rescued and attended to by a joint team
of LASAMBUS and the LASEMA paramedics.

The remains of the dead victims were, however, recovered by Emergency
Response Team of Lagos State Emergency Management Agency (LASEMA) and
handed over to State Environment Health Monitoring Unit (SEHMU) to be
deposited at Mainland Hospital morgue. Confirming the incident, the
General Manager, LASEMA, Mr. Adesina Tiamiyu, blamed the incident on
over speeding, warning motorists to be safety conscious always.

He said: “The Agency received a distress call regarding a commercial
bus that accidentally caught fire while on top speed at Cane village,
Maryland, about 2.55pm. Five persons were rescued and attended to by a
joint team of LASAMBUS and the LASEMA paramedics and were taken to the
Trauma and Burns Centre, Gbagada for further treatment.”