Late Shepherd Elijah Ademolu (a shephered in one of the celestial churches) who died in a ghastly auto crash some months back may not be sleeping in heaven peacefully for what is currently happening to his mistress, the woman who died with him in the accident. 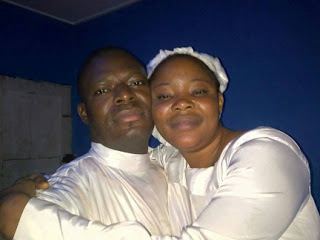 According to information obtained by brtupdates, the corpse of Elijah was to be claimed for burial, the attendants at the mortuary then said nobody had come to claim the woman, Ayomikun Titilola, who died with him in the accident.

The church has stayed off her corpse, the reason they presented is that they cannot bury someone they know nothing about.

All they knew about her then was that she often paid a visit to their late shepherd.

“The church paid for the two corpses and caskets but since none of her family surfaced, it will be wrong of us to bury another person’s daughter without them registering their presence,” the officiating shepherd said

“If we now buried someone who we don’t know his genesis wont her family come out later to say the church has used her corpse for something else?

We rejected her copse at the mortuary the day we went to claim our shepherd’s corpse because we don’t want to drag the church name into any controversy that may crop up later.

We called the family, they said they couldn’t claim someone that never told them about any Oluso she was with, so it has become the church’s property.” one of the church elders informed us.

I show off my bum to thank God — Singer says (Photos)

Court Has No Right To Entertain Omo-Agege's Suit - Bukola Saraki