Operatives of the Rapid Response Squad of the Lagos State Police Command have arrested two suspects who specialize in stealing mobile phones from their dates and prostitutes after lodging them in motels and sell to other prostitutes.

The suspects, Semiu Obanla, 35, and David Edet, 32, both married, were arrested at an hotel in Abule-Egba, Lagos after a stolen phone was tracked to the hotel where they lodged.

In his confession to the police, Obanla said: “David and I met at a site in Ikorodu where we both worked as labourers before extending the working relationship to friendship.

“Apart from working as a labourer in construction sites, I also work at the Idi-Iroko border where I assist smugglers to load and offload goods at the border posts.

“Sometime in February this year, I reconnected with David whom we had worked together at Ikorodu. I invited him to work at the border post after he had attempted to raise money through ‘Yahoo – Yahoo’ failed. 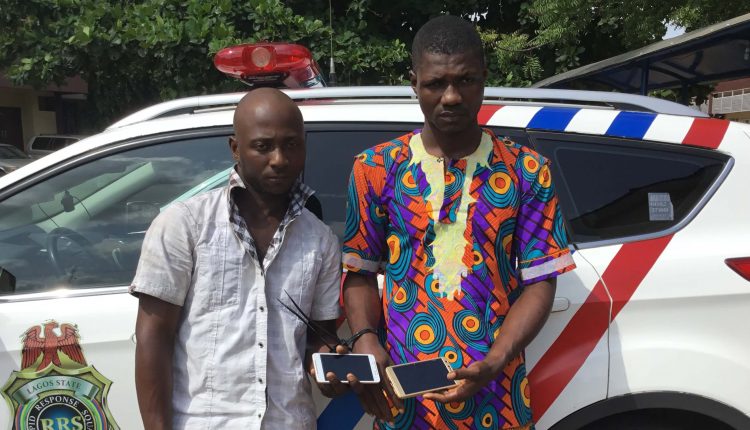 “We connived to start stealing phones and valuables from our dates and prostitutes because David and I do visit the brothels for sexual pleasures after our daily work.

“That night after drinking at a bar in Atan area of Ogun State, David and I proceeded to negotiate with prostitutes in order to enjoy our night. Before approaching the prostitutes, we planned to steal their valuables.

“The plan was successful. We had two unsuspecting prostitutes who believed we were good customers but didn’t know our motive. We agreed for N5,000 for a night for each of the prostitutes. We payed N3,000 for the lodging overnight at a nearby motel which we used regularly.

“As planned, David was to sneak into my own room at around 3am, steal my phone and hers. In the morning we began to look for the phones, to the point that even the hotel workers joined us.

“The following morning, David and I discovered her phone was an itel android phone, which we sold for N20,000 to another prostitute in Abule-Egba, Lagos, where we usually visit to have sexual pleasure. We sold the phone to one Chimedi popularly called Cyndi and shared the proceed.

“In another incident, sometime in April, I met a lady in a public transport while David and I were going from Atan to Idi-iroko. I spoke with the lady whom I later invited to our regular drinking bar.

“On the fateful day, as usual, David and I planned how to steal the lady’s mobile phone and flee the scene. When the lady arrived the bar where we were waiting for her, David and I sat separately to avoid being spotted together.

“I purposely used the lady’s phone till the battery went low. I offered to help her charge the phone inside the bar. She agreed and released it to me unweary of my being a stranger.

“I kept the phone in my pocket and walked out to tell her I was helping her to charge it. I then pretended I was receiving calls, and I stepped outside the bar from where I fled on a motorcycle and David followed suit.

“We proceeded to the Abule-Egba brothel to sell the phone as usual. We sold the phone to a sex worker. It was here RRS officers tracked the phone to us and they arrested us with some of the stolen phones.”

Recovered from the suspects were two android phones.

The suspects have been transferred to the State Criminal Investigation Department for further investigations.

Commenting on the development, the Command’s spokesman, SP Chike Oti, warned Lagosians to be cautious of criminals pretending to be helpers.

Oti added that the command would be unrelenting in its onslaught against criminals still operating in the state.