by metronews
in Careers, Crime
0 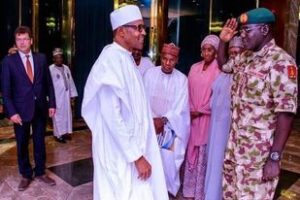 A prominent traditional ruler in Osun State, the Olowu of Kuta, Oba Adekunle Oyelude Makama has said that patriotic Nigerians appreciated the sacrifices as Chief of Army Staff, Lt-Gen. Yusuf Tukur Buratai (rtd.) as military decimated Boko-Haram under him.

The monarch said Buratai in turn also appreciate Nigerian for their support which gave the Army the victory over Boko Haram and other criminal elements in the country.

Oba Oyelude Makama said the thanksgiving he organised in honour of Lt-Gen. Yusuf Tukur Buratai (rtd.) last Saturday was part of evidence to show that the contributions of the immediate past Nigeria’s Chief of Army Staff was appreciated

Major Banjo in his view while speaking with journalists shortly after the event said Gen. Buratai was ambushed three times while battling Boko Haram insurgents and that his sacrifices to the nation should been more appreciated.

Reacting to the misconceptions that followed the statement credited to Major Banjo, Oba Makama said it was his personal opinion and shouldn’t have been ascribed to Buratai.

The Monarch said “The Palace of Olowu of Owu Kuta wishes to state that the
statement was a personal opinion of Major Banjo and not that of General Tukur Buratai.

“Gen. Buratai, for the record, is appreciative of the support and honour done him by the people of Owu Kuta and its neighbouring communities as well as the support he enjoyed from all Nigerians as Chief of Army Staff.”

“Gen Buratai considers it an honour to have been given the opportunity to serve the Nigerian Army and by extension the Nigerian people. He also appreciates floods of well wishes from Nigerians since his retirement. And if he had the honour, he would gladly do it again.”

“The Palace also wishes to extend to Gen. Buratai the immense appreciation of the good people of Owu Kuta Kingdom”, Oba Makama said.