Gov. Abiola Ajimobi of Oyo State on Thursday flagged off the state health insurance scheme, saying it would improve health care service delivery to the people.
Speaking at the flag off ceremony held at the Civic Centre in Ibadan, the governor said the scheme was a manifestation of his administration’s commitment to improving and promoting the socio-economic well-being of the citizenry.
The scheme, which is the first in the state, is aimed at guaranteeing access to quality and affordable health care services. 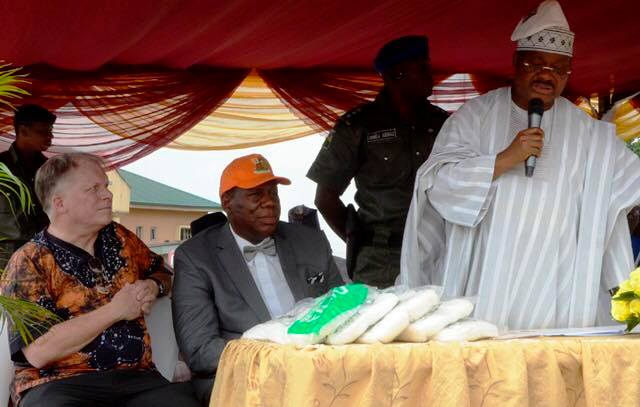 The inauguration was part of the activities marking the sixth year anniversary of the Ajimobi-led administration in the state.
“This insurance scheme is for everyone, especially the poor. It is free for children under age 5 and pregnant women.
“That is why we have pegged the registration to N200 only and a monthly premium fee of N650.
“This health insurance scheme is one among the various health initiatives we have embarked on to give the people accessible and affordable quality health care,’’ he said.
Ajimobi , who said that his administration had improved safety and security across the state, urged the people to support government’s agriculture initiatives to boost food security.
“We are committed to making life meaningful for our people. We will do everything humanly possible to make it a reality.
“We want you to continue to give your support to our administration and be involved in the state’s Health Insurance Agency,’’ he said.
Prof. Temitope Alonge, the Chief Medical Director of University College Hospital (UCH), Ibadan, promised that the tertiary health institution would partner with the state government to improve its health sector.
He urged the people to take advantage of the health insurance scheme by being beneficiaries.
Mr Lekan Ewenla, Managing Director and Chief Executive Officer, Ultimate Health Management Services, and Mr Babatunde Agbaje, the Managing Director, Alafia Hospital, both commended the state government for the initiative.
The duo, in their goodwill messages stated that the scheme would give the citizenry access to quality health care.
Dr Azeez Adeduntan, the state’s Commissioner for Health, said the initiative was in line with global practices where healthcare services are subsidised.
Also speaking, Dr Sola Akande, the Acting Executive Secretary, Oyo State Health Insurance Agency, said that the health insurance scheme was backed by an enabling law for formal and informal sectors.
Akande said that attempts by previous administrations to institutionalise health insurance in the state had failed at different stages.
“The scheme will cater for those who need the services, and even those who cannot pay.
“It will promote a standard plan with a benefit package that covers over 90 per cent of disease pattern in our communities.
“The remaining 10 per cent will come with top up packages for interested residents,’’ he said.