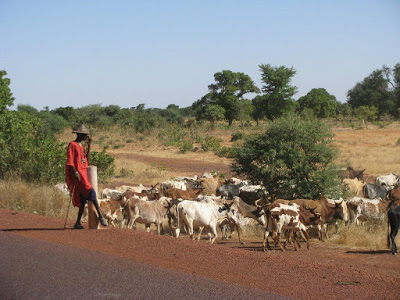 Gunmen suspected to be Fulani herdsmen
have reportedly killed a 55-year-old senior official of the Delta State
University, Abraka, Mr Sunday Idama, in Ethiope East Local Government
Area of Delta State, Punch reports.
Idama, an official of the Library
Department in DELSU, was alleged to have died of machete cuts inflicted
on him when herdsmen invaded his cassava farm at Ovre-Abraka, on
Saturday.
The incident had since sparked public
outrage over the unabated attacks by herdsmen on local farmers in the
area as herdsmen and their cattle now habited deserted farmlands.
Similarly, an indigene of Obiaruku
community, whose identity could not be immediately ascertained, has
sustained gunshot wounds when he was attacked by herdsmen at his farm.
It was gathered that the victim was
rushed to a hospital for medical treatment by sympathisers after he
struggled to a roadside where he was rescued.
Sources told our correspondent that the victim has been receiving treatment at an undisclosed hospital in Obiaruku.
A source, who confirmed the incident to
our correspondent, on Sunday, blamed the continued attacks on
government’s inability to take action against the herdsmen.
The source, who pleaded not to be named,
also accused security agents of taking sides and shielding the
marauding herdsmen from being arrested as over 20 persons had been
killed in the area so far.
Previous Post

Ambode Has Made Me Proud – Tinubu

Ambode Has Made Me Proud - Tinubu