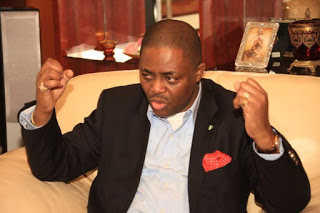 Yes I did. I stand by that. The National Intelligence Agency (NIA), Mr Ayodele Oke is a fool. He took the fall (for Amaechi) and when he told me he was going to do it. I warned him they would use him to cover the former governor of Rivers state, Rotimi Amaechi and then mess him up, Chief Femi Fani-Kayode painfully narrated.
He knows the drill, that once he commits himself. That’s all.We are in court soon. Wait and see what will happen. It is so easy for Nigerians to be fooled by their government. I have always known that. But for serious minded and well educated people to he fooled by this sort of cheap propaganda amazes me.
Ask yourself why a panel from the Villa is investigating this matter and not EFCC or DSS. Ask yourself why EFCC has not told you who owns the money. Ask yourself how much sense it makes for a security chief to keep $43 million USD in a flat with no security for two years.
Ask yourself all these questions. When you have the answers come back. When we get to court people like you will know why the Rivers State government, Ekiti state government, myself and others have said the money is Ameachi’s. It is just a matter of time. Till then, I wil say no more on this.
If it had been anyone else that owned that money every single person that has a flat in that building would have been in detention by now. Ask yourself why this is not the case. Now they are putting a spin on their cover up and bringing former President Goodluck Jonathan into it. It is shameful but I guess that is what Nigerians deserve. They are so gullible.

Olumide Bakare: His Death A Colossal Loss To The Nigerian Entertainment Industry (Release)

Olumide Bakare: His Death A Colossal Loss To The Nigerian Entertainment Industry (Release)