REPORT OF THE SCREENING COMMITTEE 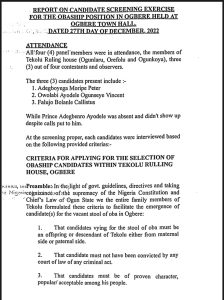 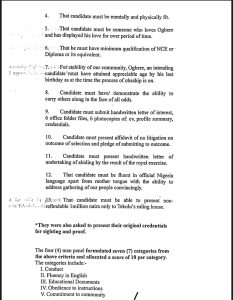 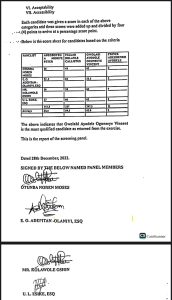 Owolabi is an indigene of Ijebu-Ogbere at Ijebu-East Local Government Area of Ogun State. He was born on the 18th day of June, 1974, at Shomolu area of Lagos State. He had an interesting and memorable early childhood days as he was known for his calm and peaceful nature. As a kid then, he would never indulge or get himself involved in any form of fight or violent acts. He was always craving for peaceful atmosphere. Among his peers then, he was specially referred to as a ‘good child’; even parents of other kids in his peer group did make such reference about him. One very obvious act that he did consistently display then as a kid was to prevent any of his peers from engaging in fight or violence. He was typically known for this, even up till now, he is still known for ensuring peaceful environment, as it has become his way of life.

Owolabi had his primary education at Oke-meta Memorial Primary School, Shomolu; after which, he proceeded to Angus Memorial High School, Igbobi, for his secondary education. In furtherance, for his educational life and acquisition of knowledge, he attended Lagos City Computer College,  In 2004, he had a Bachelor Degree of B.Ed Human Kinetics, from the prestigious University of Ibadan, after his completion of a four-year degree program. In his university days, he was academically excellent and intellectually engaging in campus affairs; especially in the area of students’ welfare or well-being.  His passionate interest in the affairs of the well-being of students made him to actively get involved in the students’ Union activities and programs, which he explored as great platform to canvass for the welfare/well-being of students on campus. He did so much; especially with constructive intellectualism, in ensuring that the interests of students were protected, both on campus and off-campus.

Consequently upon his activities for the well-being of students, in 2002, he attained the position of ‘Chairman of Joint Campus Committee (JCC), Oyo State; which comprised all the campuses of higher institutions in Oyo State; and it’s a State-chapter of National Association of Nigeria Students (NANS). With the position, he immensely impacted the lives of many students, through his intellectual engagements and altruistic programs. Another notable thing about Him when he was in the University was his skillfulness as a football player in his departmental and faculty football teams.

As an industrious and explorative personality, Owolabi likes launching himself into ventures that would always be of benefits to the society. In this light of this characteristic of his, in 2007, he decided to go into farming, so as to use it as a channel to contribute to food production and economic in the society. Practically, as a pragmatic practitioner, he has established farms at different locations, where farming activities of plantations, fisheries, poultry, and animal husbandry, are taking place. He is very committed to farming because he believes that food is pretty essential in the life of every individual and there should be adequate production of food in the society, for good standard of living. As an advocate of a better society, with selfless orientation and interest of the people at heart, he has employed many people into his farms; and by this, reducing the rate of unemployment in the society. He is very visionary and keen in ameliorating the suffering of people. Officially, for his farming operations, he has a registered company, with the name, V.O.P Framing Resources Limited.

With a tremendous sense of service to humanity, in 2010, Owolabi founded a non-governmental organization (NGO) known as ‘Greater Tomorrow’. Through this NGO, he helps the indigent people in the society. In the operation of the NGO, he has a special program f financial assistance cum empowerment for market men and women. Through this special program, he facilitates interest-free loans for them. He also has a standby intervention program that he uses to assist the widows and widowers in the society. In education, he has a program that takes care of the needs of indigent students. With the education program, he has been able to give scholarship to some students in higher institution, Owolabi has humanitarian inclination for the human society, and it was basically the observation of this that made the King of Ibese Kingdom, Ikorodu, Lagos State, to confer on him the honorary chieftaincy title of ‘Otunba Tunwase of Ibese Kingdom, to acknowledge, appreciate, encourage, and honor him, for his selfless-service to humanity.

Hitherto, Owolabi has led a life of values and moral principles. His ultimate goal in life is to inculcate ideas and resources into manifesting a literate society – a society where majority will be educated and there will be celebration of and reward for education and intellectuality. He likes and advocates for an organized society, and he believes that quality educational system in the society can make it to be accomplished. His concept about leadership is significantly of excellence and true representation of the people. He has great leadership acumen, with an effective capacity to coordinate people for a sane and peaceful society. Through leadership skills acquisition training programs, he has trained himself to be a great leader in the society. He discourages societal vices and ills; especially corruption and criminality, and that’s why he participated in sessions of a training/workshop organized by the ‘Economic and Financial Crime Commission’. More so, he aligns with the notion of that a better society has to shun corruption and criminality in all forms.  As far as the human society is concerned, Owolabi profoundly encourages the values of integrity, justice, equity, honesty, accountability, compassion, and love.  He is resolutely a capacity-builder of people and a harnesser of resources for the general good of everyone. He is a man of the people.