Nigerian Presidency Stops Use of DMI for Aso Rock Security, Replaces Them With DSS 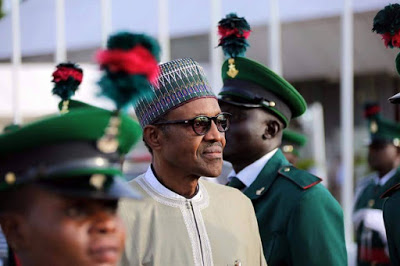 The presidency may have carried out the
directive of President Muhammadu Buhari to withdraw soldiers drawn from
the Directorate of Military Intelligence (DMI) from the Presidential
Villa, The Guardian reports.
They have now been replaced with
operatives of the Department of State Services (DSS), Nigeria’s
equivalent of the US Secret Service.
Buhari had, on assumption of duty on 29
May, 2015 dislodged the DSS as first-ring security around him and
replaced them with soldiers drawn from the DMI.
The redefinition of the roles of the DMI
and the DSS in the Presidential Villa may check their rivalry, and
improve security in the presidency.
The soldiers were initially moved into
the inner circle of the security network in the villa when President
Buhari took over, while DSS operated at the periphery.
It was learnt that the directive for the
removal of the soldiers was handed down by President Buhari shortly
before he went on his vacation in the United Kingdom (UK).
The Guardian reports that the
current Chief Security Officer (CSO), Bashir Abubakar had not been
comfortable with the security structure which left soldiers as
first-line security aides of the commander-in-chief.
A top source who confirmed the
development yesterday, disclosed that the two security agencies had been
at daggers drawn behind the scene over who provides protection to the
president since Buhari moved into his Aso Rock official residence in
2015.
According to another source, “protection
of the president by body guards is actually the work of the DSS but Mr.
President did not have confidence in the service when he first came in,
because of the way they treated him during the 2015 election.
“The soldiers were moved into the inner
circle of the security network while DSS operated at the periphery. This
has not gone down well with the DSS,” he noted.
Specifically, it was learnt that there
had been a subtle disagreement between the former Chief Security Officer
(CSO) Abdulraman Mani and the Aide de Camp (ADC) to the President, Col.
Lawal Abubakar over which of the plain-clothes security agencies should
provide close quarter protection to the president and his immediate
family.
It was learnt that while Mani insisted
on allowing men and officers of the DSS to provide the statutory shield
around the president and the first family, the ADC was more disposed to
having the plain-clothes operatives of the DMI to carry out the
function.
According to reports, the disagreement
between the two aides, was what led to the eventual removal of the
former CSO who was replaced by Abubakar.
Mani had, in a memo dated Friday, June
26, 2016 countered the ADC’s directives which shoved aside the DSS. He
had insisted that the order was a misrepresentation of the president.
This was before his eventual removal.‎
Mani who in the memo quoted relevant
sections of the constitution which grant powers to the DSS to carry out
such security duties was said to have copied the National Security
Adviser, the Chief of Defence Staff and the Director -General of the
DSS. He had also noted that the various security agencies at the villa
would be educated on their various responsibilities.
The memo read in part: “In fact, the
issues raised in the aforementioned (ADC’s) circular tend to suggest
that the author may have ventured into a not-too-familiar terrain.
“The extant practice, the world over, is
that VIP protection, which is a specialised field, is usually handled
by the secret service, under whatever nomenclature.
“They usually constitute the inner core
security ring around every principal. The police and the military by
training and mandate are often required to provide secondary and
tertiary security cordons around venues and routes.
“However, all other security agencies,
including the army, the police and others, also have their roles to
play. It is on this note that heads of all security agencies currently
in the Presidential Villa and their subordinates are enjoined to key
into the existing command and control structure.
“They are to work in harmony with each
other in full and strict compliance with the demands of their
statutorily prescribed responsibilities.
“Meanwhile, joint training programmes
and other incentives will be worked out in the days ahead to ensure that
all security personnel at the Presidential Villa are properly educated
to understand their statutory roles and responsibilities.
Previous Post