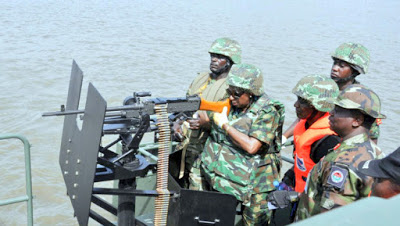 The Nigerian Navy has
recorded another major feat in its ongoing operations against piracy and
other criminalities in Nigerian waters. Today, Nigerian Navy Ship
OKPABANA rescued an oil tanker, MT GAZ PROVIDENCE which came under
pirate attack yesterday off Bonny Island, River State. The rescued ship
had 21 crew members onboard and upon encountering the pirates sent a
distress call which prompted the Nigerian Navy to dispatch NNS OKPABANA
to rescue her. As at   today 1:30 pm, NNS OKPABANA personnel have
boarded the rescued oil tanker to investigate and gather information on
the failed hijack attempt.
In
a related development, personnel of the Nigerian Navy Ship VICTORY also
repelled a pirate attack on an oil tanker MT RIO SPIRIT. The pirates
attempted to hijack the oil tanker after she loaded products from QUA
IBOE terminal and     sailed 110 nautical miles south of Akassa in Delta
State where the incident took place. Not mindful of the fact that the
vessel was under security cover by the operatives of the Nigerian Navy
who were onboard a security vessel, the assailants swooped on MT RIO
SPIRIT in an attempt to hijack her. The Nigerian Navy operatives
repelled the attack and secured the route of the vessel. Not deterred,
the pirates made another spirited effort to hijack MT RIO SPIRIT 30
minutes after the first attempt which was also repelled. However, she
was successfully escorted to safety as she continued her voyage.
Furthermore,
a patrol team deployed by Nigerian Navy Ship DELTA has discovered and
destroyed 8 illegal refineries around Osiagbene Creek in Ogbeletobo
Community of Warri South West LGA of Delta State. The items destroyed in
the raid include 15 metal tanks laden with about 130MT of product
suspected to be illegally refined AGO and about 200MT of substance
suspected to be stolen crude oil.
Additionally,
an anti-crude oil theft patrol team deployed by NNS PATHFINDER
conducted patrols of creeks and waterways in their area of operations.
During the patrol, the team raided 3 illegal refineries in which
unspecified quantity of illegally refined AGO and stolen crude oil were
destroyed around Bille Community in Rivers State. Similarly, the team
raided 6 active illegal refining sites around Bille/Kalabari axis. About
45 metric tons of suspected illegally
refined AGO and steel tanks with unspecified quantity of stolen crude oil were also destroyed.
In
view of the foregoing, the Nigerian Navy once again wishes to reiterate
its determination to combat criminalities in the nations waters and
ensure a safe and conducive atmosphere for legitimate maritime
operators. In view of the importance of the message, you are please
requested to disseminate same for public awareness.
Previous Post

God revealed to me ‘Buhari’s time is up’ – Primate Olabayo

God revealed to me ‘Buhari’s time is up’ – Primate Olabayo