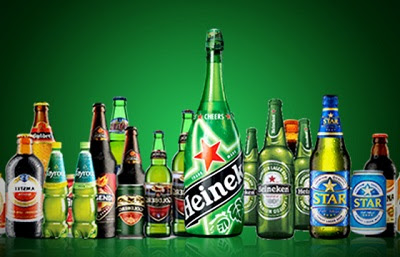 After a fulfilling
and rewarding business relationship in 2016, brewing giant, Nigerian Breweries
Plc last Friday in Lagos, rewarded its distributors and trade partners spread
across the country.
The award ceremony which took place at Eko
Hotels and Suites, Victoria Island, Lagos was in honour of distributors and key
transporters of the company who excelled in the course of their business
partnerships with Nigerian Breweries Plc last year.
Managing Director of
Nigerian Breweries Plc, Mr. Nicolaas Vervelde thanked the distributors for the
longstanding relationship and the value added to the business last year. He
restated the commitment and sustained support of the company in the years ahead
despite the continuing challenges in the economy.
“As partners for greatness,
we need you now more than ever before to win. The environment is more intense
and the competitive landscape continues to change every day locally and
globally, “he said.
He disclosed that as
the company looks forward to 2017 and is prepared for the challenges, the years
ahead will be more profitable, since the fundamentals of the Nigerian market is
very positive. Vervelde lauded the partners for 70 years of support and
affirmed that the company looks forward to sustaining its partnership with them
in the years ahead.
Hubert Eze, the
company’s Sales Director thanked the company’s customers for the unrelenting
support throughout 2016 and explained that the annual award was conceived to be
a celebration of their excellent performance in the preceding year. He added
that despite the challenges in the operating environment, the company did well in
2016 and achieved many milestones as a result of the partnership with them. He
challenged the customers to resilient as they set out to achieve their mutual
business objectives in 2017.
During the event,
several awards were presented to winners including the CFAO Award for
Non-alcohol Distributors; Growth Award and Isuzu Direct Depletion to Road
Award. Others were Regional Key Transporters Award; Brand Champions; National
Key Transporter; Regional Champions and National Champions.
In the climax of the event, last year’s winner,
Ken Maduakor Group Limited from Nnewi in Onitsha marketing zone beat two others
to emerge National Champion and the company’s best distributor for 2016.
Nathan Ofoma and
Sons Limited, Nkpor, Anambra State came second and beat Ifeoma Chukwuka Nigeria
Limited, the winner in 2013 and 2014, to the third position
Maduakor who set an
African record last year by selling more than five million cases of beer in
2015, broke his own record by selling more than six million cases in 2016. He
thanked the company for the gesture and advised that the momentum be sustained so
that the company and its partners will remain on top.
For their efforts,
Maduakor got a ten-pallet Isuzu Truck and an award trophy while Nathan Ofoma
and Ifeoma Chukwuka each got a six-pallet Isuzu NMR and an award trophy.
Ancaps Global
Investment Limited from Kaduna won the National Key Transporter Award and got a
plaque, an award trophy and a Mitsubishi L200 double cabin 4×4 DC Van. Pauline
Chimex who won the raffle draw for the night got a Mitsubishi L200 Van.
Nigeria Breweries
Plc, the pioneer and largest brewing company in Nigeria was incorporated in
1946 and marked its 70th anniversary on November 16, 2016.
Previous Post