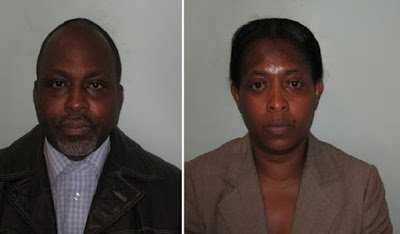 A UK-based Nigerian pastor has been jailed in London for sexually assaulting a 16 year old girl and another woman during “private prayer sessions”.

According to TheIndependentUK, 55 year old Benjamin Egbujor, a Bishop at the Jubilee Christian Centre in Peckham, South London was jailed along with his female secretary, Rose Nwenwu, who acted as his accomplice.

Benjamin Egbujor and Rose Nwenwu reportedly preyed on their victim’s vulnerabilities, whilst satisfying their own sexual urges under the guise of private prayer.

The Inner London Crown Court heard the victim, who was under the age of 16, was told by Egbujor, a bishop at the Jubilee Christian Centre in Peckham, South London, that she had been “chosen” to attend a special private prayer session.
But after being taken to the 55-year-old’s office, the girl was forced to undress and oil was poured over her.

After she told her family what happened, they reported the incident to London’s Metropolitan Police who discovered during the course of their inquiries that another woman in her 30s had also been sexually assaulted by Egbujor.

Egbujor, of Belvedere, Kent, was sentenced to three years in prison for the sexual assault and four months, to be served consecutively, for inciting a child to engage in sexual activity.

Nwenwu, 43, of West Norwood, London, was also sentenced to three years’ imprisonment for sexual assault and three years, to be served concurrently, for helping and encouraging Egbujor.

Both were made subject of a Sexual Harm Prevention Order and will have to sign the Sex Offenders’ Register.

Police believe there may be other victims and urged them to come forward after the Bishop, 55,  was found guilty of sexual assault and of causing or inciting a child to engage in sexual activity.

“Egbujor and Nwenwu exploited the trust of their congregation when they targeted and abused these victims.

“They believed their position within the church would protect them from facing justice, but the court has held them accountable for their actions. I hope this conviction serves to empower victims of sexual violence to come forward and report to police, and as a warning to offenders who think they can use their position to protect them from the law,” she said.

The Jubilee Christian Centre was approached by The Independent request for comment, but none had arrived at the time of publication.

NEPA No Dey Take Light For My Side, Says Man Who Married Two Wives On The Same Day In Delta