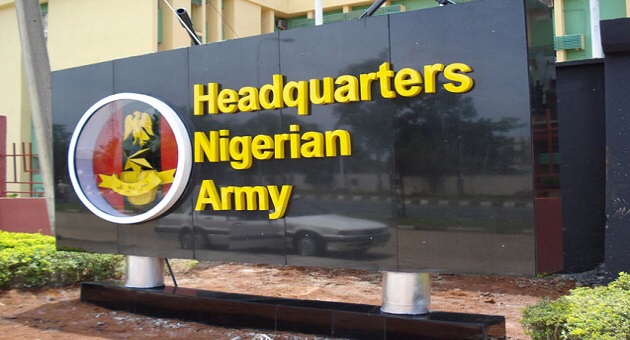 The attention of Headquarters 82 Division Nigerian Army has again been drawn to an unjustified, invidious and over flogged accusation, this time, by the Campaign for Democracy (CD) of “Mass killings of Igbo Youths by the Nigerian Army”. This allegation is contained in a statement issued by the Publicity Secretary, CD in Onitsha, Anambra State.

In the statement, the CD claimed that “No fewer than 2000 Igbo Youths had been killed by the Nigerian Army under the guise of Rules of Engagement”.

Similarly there was also report claiming that Amnesty International indicted Nigerian Security Forces in the “killing of No Fewer Than 150 Peaceful Pro Biafra Protesters” in the South Eastern part of Nigeria with different captions in the media. These story lines are referring to the encounter between the Nigerian Army and MASSOB/IPOB protesters between August 2015 and August 2016. All these have been severally thoroughly refuted in many media platforms by the Nigerian Army and it is the same position that this rejoinder has soundly adopted.

For emphasis and clarity, the Nigerian Army as an accountable, morally and professionally sound organization had variously through its Human Rights Desk at the Army Headquarters, painstakingly investigated allegations of rights violations and the results indicated specifically that this claim is false, malicious and should therefore be ignored for the sake of Nigeria.

Instructively, the Nigerian Army under its constitutional authorization to aid Civil Authority and Military Aid to Civil Power must continue to act in the best interest of the nation (in collaboration with other security agencies) to de-escalate violence and checkmate security threats across the nation. This task must be done, despite the sordid propaganda and possible politicization of the issue by ill meaning Nigerians.

Finally, looking at the recurrent posture of this allegation, the 82 Division Nigerian Army wishes to state that relevant authority/ies in the South East are at liberty to set up an inquiry in to this accusation with the view to getting to the roots and end of this obnoxious and unfounded claim.