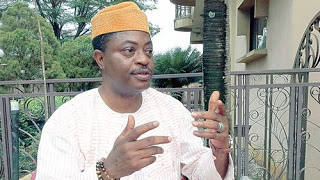 There
are two types of people when it comes to efficiency in Government services,
those who talks and talk before doing things and those who do things then talk
to sensitize the people about it, the current Postmaster General of Nigeria
(PGN), Hon. Bisi Adegbuyi, falls into the second category, as he has being
allowing his hard-work talk aloud with innovations he’s bringing to Nigeria’s
archaic postal services, while he’s trying so hard not to say much about his
efforts.

It
was reliably gathered that the PGN has been working round the clock with some
of Nigeria’s best brains to put in place a system that will bring life back to
our post offices, though in coded words he let the cat out of the bag recently
in an interview monitored on Ben TV, where he enjoined Nigerians in diaspora to
tap into NIPOST’s Robust Youths Engagement Strategy, which will see the
parastatal engaging constantly the over 70 million Nigerian youths.

He
explained further that the new system will see people turning to the
post-offices for many services apart from only sending letters, stating that
youths area of interests like, Fashion, Entertainment, entrepreneurship
programmes and many more will be brought to the post-offices in ways the youths
like doing things now.
Though
the PGN refused to reveal more of this his jealously guarded revolutionary and
innovative idea, we were reliably informed by sources within the system that it
is the first of its kind in Africa project in electronics stamp or e-stamp. The
source revealed that entertainment, fashion, and many other events like that
will be given a facelift with the new e-stamp system, a situation where
artistes will have their face as the ticket to their shows in form of stamps.
It
was further revealed that all is set for the official launch of one Africa most
revolutionary postal concept, which will make sending of letters, stamp duty
and many other things easy for Nigerian and whoever choose to patronize the
post office. Though Hon. Adegbuyi will want it all wrapped-up before informing
the populace about it, the new idea we gathered has been eliciting excitement
from some staffs of NIPOST who revealed that most transaction will now be done
online via www.estamp.ng, a
site specifically created for the purpose of the electronics stamp of the
postal agency.
Previous Post