MOUKA CELEBRATES FIRST BABIES OF THE YEAR ACROSS NIGERIA 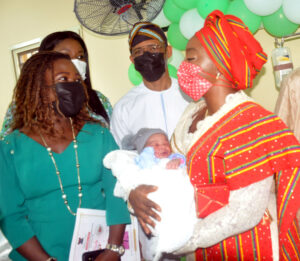 Mouka, Nigeria’s foremost manufacturer of mattresses, pillows and other bedding products, has restated its commitment to adding comfort to the lives of Nigerians of all ages, including newborns. One of the initiatives to bring this corporate mission to reality is through the First Baby of The Year Program.

Mouka has continued to run this program consistently in partnership with the Lagos government. At this year’s ceremony, Mouka presented gifts to mothers of the first babies at the Harvey Road Health Center and Maternity, Yaba, Lagos Mainland. At the same time, this same gesture was replicated in other locations in the state, such as Onikan Health Center and Lagos Island Maternity center. Locations outside Lagos were not left out as first babies were celebrated by the brand in Ogun, Oyo, Edo, Imo, Enugu, Rivers, Cross River, Akwa Ibom, Kaduna, Kano and Plateau States.

Items presented by the company to the first births included Dreamtime mattress, Mouka baby mat, baby wipes, diapers and other items of value to the mother and child.

Speaking at the event in Lagos, the wife of Lagos state governor, Dr (Mrs) Claudiana Ibijoke Sanwoolu, thanked Mouka for the valuable gift items and praised the company’s “consistency in adding value to life through quality sleep”.

Other notable personalities present included the Lagos State Commissioner for Health Dr, Akin Abayomi, the MD/CEO of Harvey Health Center and Maternity, Dr Yetunde Sotunde, and other top government functionaries who were part of the Governor’s wife’s entourage.

Commenting on the initiative, the Brand Manager, Mouka, Yemisi Obadina, explained that the priority of Mouka is to continually advocate a healthy sleep culture, especially in children, adding that the Mouka Dreamtime mattresses are specially designed with children in mind. According to her, the Dreamtime mattress is water-resistant yet breathable to prevent excessive sweating, thus keeping the child’s body cool through the night. It is also made with the right foam density to keep them comfortable while they sleep. Obadina pointed out that quality sleep is associated with healthy physical and cognitive development in children, which is why the brand associates itself with the worthy programme of the Lagos First Lady to ensure these babies enjoy the gift of quality sleep from birth.

The mother of the first baby at Harvey, Mrs Abdul Ganiyat Sukurat, expressed profound gratitude to the bedding company for the valuable gesture.

In over 62 years, Mouka has grown to become Nigeria’s preferred brand in its industry and has maintained its reputation as an innovative trendsetter. Mouka has a wide range of quality products such as the Royal Luxury Pillow Top, Wellbeing orthopedic range of mattresses, Klinic hospital mattresses, Mondeo Plus spring mattresses, and an assortment of pillows to help Nigerians sleep well and wake up refreshed.