After complains about maltreatments of Nigerians in South Africa by South Africans, Nigerians continue to be victims in their hands. Sadly, despite all the call to our government to weigh in, nothing is being done.

More Nigerians are being harassed around the world and our government just sits there watching without taking any action. Yet, when foreigners are attacked in Nigeria, our government is quick to get to the bottom of the matter. 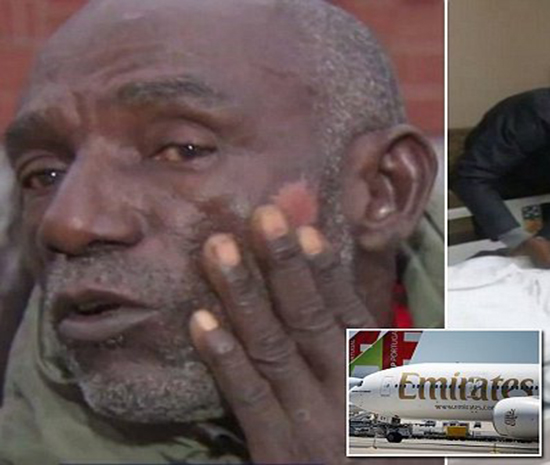 74-year-old David Okeone at the moment is in the hospital after he says crew members on a United Arab Emirates flight to Chicago tied him up and beat him earlier this week.

He and his family say the injuries were caused by flight attendants on the flight from Dubai to O’Hare, and they still have no idea why.

David can barely speak. He told his family he was also punched in the face by a flight attendant. When the plane landed, he was taken by the police to the hospital. But no one told his family.

Mr David Okeone’s family wants answers, which they aren’t getting from the police and the Emirate airlines management regarding the elderly man’s injuries.

I believe this is a case Nigerian government should be asking questions about. This is an elderly man who cannot defend himself. If we flip the matter over and a Nigerian carrier staff beat up a UAE man on a plane and leave bruises, the country would have launched an investigation into the matter by now.

BAT is a Top Employer in 35 countries worldwide

Saraki, EFCC and the Media