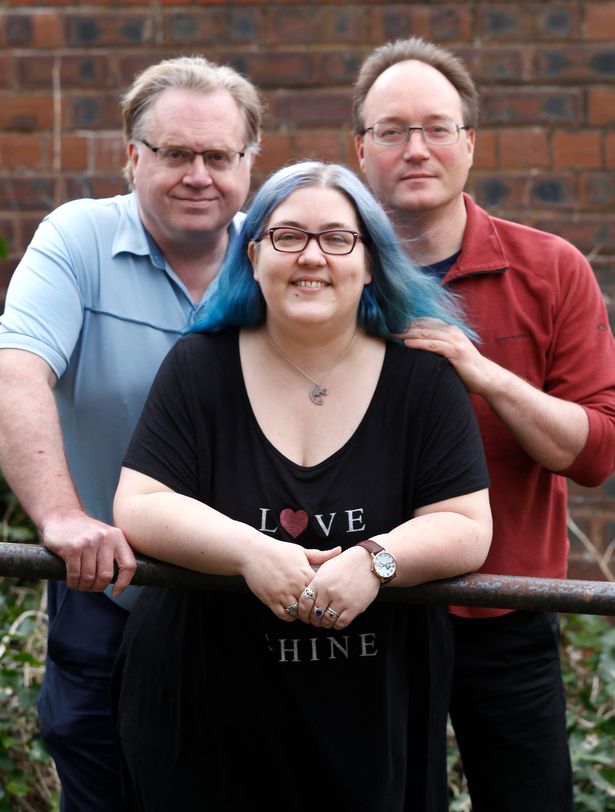 Mary Crumpton admits she doesn’t have what most would call an average marriage – but argues that having a husband, fiancé and two boyfriends works for her.

Moreover she claims it also works for the men in her life.

The 44-year-old from Chorlton spoke publicly about her relationships to the Manchester Evening News in the hope of allowing others to understand people who follow the practice polyamory.

She lives with Tim and John and the other two men live nearby.

Here Mary, who was a teacher and is now a therapist, describes what life is like and how she began exploring having more than one partner at the age of 29.

She said: “I was brought up in quite a traditional home. I had boyfriends and was monogamous. Having more than one partner never crossed my mind. In my twenties I got married and settled down in Chorlton fully intending to be with my husband for life.

“At the time I didn’t really question having just one partner. It was normal. I did sometimes have feelings for other people, but I felt guilty about doing so and just took it as a sign that I didn’t love my husband enough. When the marriage didn’t work out, I met someone else, and started a monogamous relationship with him.

“The idea that loving more than one person might not make me a terrible human being only dawned on me when, at a pub, I bumped into a person who had more than one partner. I had never come across it before, or the term ‘polyamory’ which means ‘more-than-one love’. I was quite shocked, and curious about how it all worked for them.

“My partner was with me when I met the polyamorous person, and he was curious about it too. At the time neither of us considered it for ourselves, but I think the seed had been planted.

“A couple of years later, in 2003, I suggested to him that perhaps we might try an open relationship. I was interested to explore the possibility of allowing myself to love more than one person. I think for him it was more about the thought of more than one sexual partner. We were both curious to see how it could work for us.

“I took to it immediately. I had a friend that I was already close to and that friendship drifted very naturally into something more. My partner had a similar experience with a friend of his. It was a revelation to me. I quickly realised that I had been ‘wired up’ this way probably all my life – loving more than one person now seems like the most natural thing in the world to me and I can’t imagine being any other way.

“For me, it is all about love. Of course, some of my relationships have been sexual, but sex is not the driving force for me.

“I am no longer with the partner that I first explored polyamory with, though he and I remain close friends, and he has continued to be polyamorous.

“I married one of the people I first dated polyamorously. My husband, Tim, who is 43, and I got together in 2004 and were married in 2013 at Manchester Museum under the Tyrannosaurus Rex.

“I have a partner, John, 53, who I have been with since 2011, and who I am planning to ‘marry’ this year. We can’t legally marry, but we are having a full wedding-style commitment ceremony at Chorlton Unitarian church in May.”

Both men are straight and have been brought together through Mary. They have all lived together since 2015.

Mary said: “John has been living with me and my husband in our house in Chorlton since 2015.

“He has a flat a few streets away from my house and I usually stay over at his place once or twice a week, and sometimes he stays at mine. Michael spent Christmas with us and we had a really special day together.

“Last but not least, I am with James, 73, who I bonded with while watching football games in the pub together in 2015. My husband and John have no interest in football, so it is nice to have someone to share that interest with.

“One of the lovely things about a life with more than one partner is that there is no pressure on one person to supply all my needs. My husband Tim and I share an enthusiasm for environmentalism and all that entails, like electric cars, and veganism. With my fiancé John I enjoy watching science-fiction and we go to church together.

“With Michael, I like to watch and support him playing for his local darts team at the Royal Oak, and we go to karaoke nights – which is possibly more embarrassing than admitting to polyamory!

“Living in a house with more than one partner is something I have done for a number of years now. I suppose in many ways it is no different from living in a shared house with a group of friends, or family. All the usual things about whose turn it is to wash up etc. Tim and John get on well, I suppose a bit like brothers, going on bicycle rides together for example. So it seems to work okay. They have something in common in that they both love me of course, and friends joke that I need two of them to keep me in-line.

“Like in any relationship, insecurities can arise. Though in some ways there is less jealousy perhaps – no fear that a partner might cheat on me because why lie about it when having another partner is allowed anyway? Sometimes there might be a fear that a new partner is ‘better’ in some way than a current one, but good communication and offering reassurances allows that to be dealt with.

“In many ways I have found that being in open relationships has forced me to communicate much better. I am very honest and open with my partners about my feelings and needs, in a way that I didn’t have the courage to be in previous monogamous relationships. So I think I have grown as a person, and have better and stronger relationships now.

“Of course, all of that is possible in monogamous relationships, and I am not suggesting polyamory is in any way better, just different. But it works well for me personally.

“I don’t have children, and have no desire to have children. I see no problem with bringing children into a polyamorous set-up though, because I have seen co-parenting work really well for other polyamorous groups. It is not something we plan though.

“Mostly people have been great. They had lots of questions about it, and some family members needed reassurance that we were all happy and no-one was getting hurt. I find that I have a huge capacity for romantic love. I just naturally fall in love with more than one person at a time. So to settle down with just one person for the rest of my life just doesn’t feel natural to me.

“People sometimes ask me if it means that I love my husband, or any of my partners less. And I say no. Perhaps it is a bit like how we love our children – when a parent has a second or third child, it doesn’t mean that they love their first child any the less. I think that romantic love is unlimited too. Time is limited of course. But I do not believe that love is. It certainly isn’t for me.

“I get different reactions. Most people are interested and people often say ‘I wish my wife/husband would let me do that’. I sometimes get negative reactions too – I have been called a slapper or a slag. I think that negativity mostly arises because I am doing something a bit different and sometimes that can make people feel uncomfortable.

“I have had women assume that I am a ‘man-eater’ and will try to seduce their husband – to be honest that just makes me laugh. I have also been told that what I do is ‘against God’s law’, though in fact there are many instances of multiple marriages in religious texts, and there are denominations of both Christianity and Islam that allow multiple marriages.

“Mostly though, people are open to my lifestyle – they can see that I am honest with my partners and that we are all happy, so they see it as no-ones business but ours.

“Polyamory is more widely known about now too so it is perhaps less of a shock to people now than it might have been, say, 10 years ago.

“We all go out together. For example all going out for drinks for my birthday or to social gatherings and events organised by friends or trips to the cinema or whatever. Tim, John and I go down to London to see my family the three of us. And my sister’s children refer to us as ‘Auntie Mary, Uncle Tim and Uncle John’.

“People have the idea that polyamory is all about sex which isn’t the case. I don’t do one night-stands. I generally wait a month or so at least before becoming sexual with anyone I start dating. I suppose in that sense I am old-fashioned. My relationships themselves vary in how sexual they are – one of them being more platonic with not much more than cuddling and kissing. I suppose that, for me, is another good thing about polyamory – each relationship can find its own level in terms of sex and with other things too. And there is no pressure on one relationship to tick all the boxes, so to speak.

“Some of the biggest benefits of this way of living are those I have already mentioned, but I guess there is a financial benefit I haven’t mentioned – cohabiting with two of my partners makes things easier financially for us. So much so, that the three of us took the decision that I would reduce my paid-work-hours and do more unpaid voluntary work in our community.

“The only negative for me really is dealing with other people being judgemental sometimes. But thankfully I am quite thick-skinned. And I hope that my being open about it with friends, and your readers, will help people understand polyamory better.

“Maybe this will mean that there will be less judgement from strangers in the future, just as homosexuality and transexuality have become more accepted in society as people have been more aware of them.”

Mary is standing at the next local election for the Chorlton ward representing the Green Party.

Why my Marriage crashed – Alaafin Of Oyo’s estranged wife, Queen Ola opens up