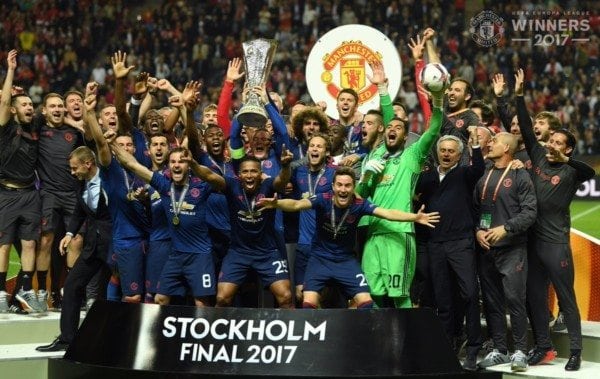 Manchester United claimed their second major trophy of the season and secured Champions League football as they overcame Ajax to win the Europa League final in Stockholm.
On an emotional night following the Manchester attack which killed 22 people atAriana Grande‘s concert on Monday, United’s fans were allowed a measure of celebration as Jose Mourinho‘s side won in comfort.
Paul Pogba‘s deflected shot put them ahead in the 18th minute and Henrikh Mkhitaryan‘s sixth Europa League goal of the campaign confirmed they would add to the English Football League Cup won against Southampton earlier this season.
Wayne Rooney made a brief appearance as a substitute with a minute left and was handed the captain’s armband by Antonio Valencia on what could well be his farewell appearance for United.
And as the final whistle sounded and United’s celebrations began, chants of “Manchester” rang around the Friends Arena in tribute to those who died and were injured in the attack which cast a shadow over this showpiece occasion.
The win means the Red Devils are now the fifth team to claim the full quota of European trophies, joining an illustrious list with Ajax, Chelsea, Juventus and Bayern Munich.
It was also a European final won without key defender Eric Bailly, who was suspended, and 28-goal leading scorer Zlatan Ibrahimovic, who sustained a serious knee injury in the quarter-final win against Anderlecht at Old Trafford.
The win also ensures Jose Mourinho is the first manager to win both the Europa Cup and UEFA Champions League more than once.

Tuchel: Now Is The Time For Chelsea To Win The Champions League