He knows this. Doctors and nurses told him after he drove
himself to the hospital the morning of March 23 after being severely
burned and shocked by 110 volts of electricity from charging his iPhone. 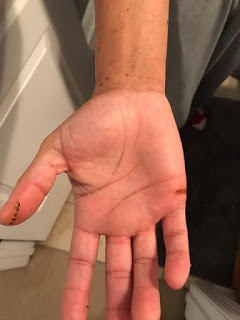 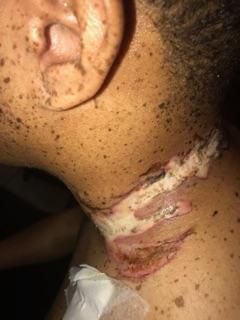 The night before Day did what he does every night. He
plugged his iPhone in to charge by his bed. He laid the phone in his bed
and went to sleep.

Early the next morning, he awoke to the feeling of heat and an electric shock that knocked him out of his bed.

“In a one in a million chance,” Day said the dog-tag
necklace he wears everyday got caught in the exposed prongs of the
charger head, which was loosely plugged into a cheap extension cord.
“My necklace became a conductor” for electricity, he said.

Day said he could feel pressure around his neck. He said his
vision started to fade, but he could hear his heartbeat as if it was
beating in his hand.

“I could say it was probably the equivalent of being shot,” he said, of the pain. “It was such a jolt.”
Miraculously, Day was able to rip the necklace from his neck
while he was being shocked. “I shouldn’t have been able to move,” he
said.

“If I hadn’t gotten that chain off my neck, it would have killed me,” Day added.
Day credits God with saving his life. “I can only give it to God,” he said. “I didn’t do it.”