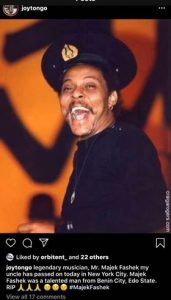 Majekodunmi Fasheke, popularly known as Majek Fashek (pronounced as Ma-je-ko-dun-mi Ifa-kii-she-eke), is a Nigerian singer-songwriter and guitarist.[1][2] He is best known in Nigeria for the 1988 album Prisoner of Conscience, which included the multiple award-winning single “Send Down the Rain”. Also known as The Rainmaker, he has worked with various artists worldwide, including Tracy Chapman, Jimmy Cliff, Michael Jackson, Snoop Dogg, and Beyoncé.
Last year the internet was agog with strong rumor of his death,which was later dispelled.

Fashek was born in Benin City to an Edo mother and a Ijesha father, but identifies with his Benin roots. Various translations of his name Fasheke (Ifa-kii-she-eke) include “high priest who does not lie”, “powers of miracles” and “(system or medium of) divination does not lie”. After his parents separated, Fashek remained in Benin City with his mother, and soon joined the choir in his local Aladura church and learned to play the trumpet and guitar whilst composing songs for the choir.
Musical career
Early 80’s: Jastix
In the early eighties Fashek, who at the time went by the stage name Rajesh Kanal, joined the group Jastix with McRoy Gregg, and Drummer Black ‘Rice. They were best known as the in-house band on the show Music Panorama on NTA Benin, and toured with fellow reggae group The Mandators. Jastix were also session musicians for upcoming reggae singer Edi Rasta, who would later be known as Evi-Edna Ogholi. 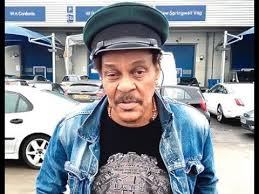 Fashek was married to Rita Fashek who inspired the song “Without You”; the couple had four children together, but have since divorced.] In 2015, it was revealed that Fashek was bankrupt and battling drug addiction. After admitting that he needed help, he was admitted into a drug rehabilitation centre in Abuja, but has since recovered, and returned to music.

Besides his struggle with drug addiction, other health conditions required his hospitalization on several occasions. He was rumored dead in September 2019 but his manager quelled the rumors, confirming that Majek had indeed been critically ill, hospitalized at the Queen Elizabeth Hospital, Woolwich, England, and in dire need of financial assistance. Billionaire businessman and philanthropist Femi Otedola has pledged to cover all the singer’s medical expenses.
Source:wikipedia 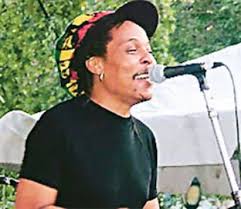