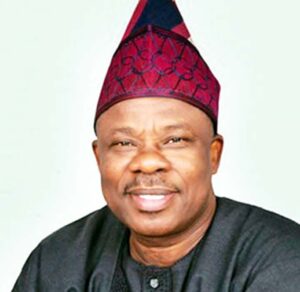 “Loyalty is what we seek in friendship.”

Since his formal declaration to throw hat in the ring to run for 2023 presidency, Former Governor of Ogun State, Senator Ibikunle Amosun has changed the political dynamics of presidential aspiration of the ruling party, All Progressives Congress, APC.

Political pundits have made speculations that President Muhammadu Buhari is likely to reward Amosun with the ruling party’s presidential ticket, holding to their years of friendship that transcends politics.

Senator Ibikunle Amosun was once quoted by a national daily as describing his relationship with President Buhari as transcending beyond politics,

“I must say that my relationship with President Buhari is not even about politics. I have known him way back, even before all my leaders. We have been together. He is like a father to our family.

“Anything he is doing I am there and anything we are doing, he is also there. So, it has nothing with politics; it is just like a family thing. But you know, people will want to read politics into everything,” he said.

As a matter of factly, politically, Senator Amosun is a major stabilizing factor for President Buhari in the Southwest.

Amosun has not kept anybody in doubt that he has all it takes to slug it out with other 27 presidential aspirants of the party and emerged as the candidate of APC.

For those, who have been following the political trajectory of the former governor, he is not a push over in the Nigerian politics, especially in the internal politics of the ruling party. Apart from being among the few that has the ears of President Muhamadu Buhari, many are of the opinion that some eminent Nigerians across the six geopolitical zones are routing for his candidacy.

Speaking during his public declaration in Abuja where he unveiled his eight-point agenda for the transformation of the country’s fortunes, Amsoun said his wealth of experience in both the public and private sectors has prepared him to lead Nigeria to economic prosperity where lives and property will be secured.

He reeled out his campaign manifesto to include improving security network of the nation, creating enabling environment for business to grow the economy and provision of infrastructural facilities for the teeming Nigerian populace.

His words: “Today, I am formally announcing my candidacy for the Presidential ticket of our great party, the All Progressives Congress and the presidency of the Federal Republic of Nigeria.

I do so conscious of the immensity of the task ahead in our country and the magnitude of the sacrifices that anybody who wishes to lead our country into the next phase must make. “This is to honour a historic call and duty to lead the next phase of our collective journey to national glory. It is a duty to re-energise our faith in the future of this country even in the face of the threats to our national sovereignty by insurgents and terrorists; a duty to renew hope in our collective destiny even in the light of some doubts expressed and mobilised in some quarters about our shared fate.

“I am convinced about my capacity in leading the country to national glory. I offer myself to serve as national revival and rejuvenation in providing comprehensive audit of security architecture and accelerate economic growth in the country.” On issues of insecurity and economy, which according to many should shape the debate ahead of the 2023 presidential election, Amosun declared that he will tackle them headlong.

However, political analysts have pointed out that two major issues that require urgent attention in Nigeria at the moment is tackling insecurity challenges and revamping the economy. Amosun in his declaration speech vowed to give priority to these two key issues.

The two pillars of the agenda that he promised tol elaborate in the weeks ahead are national security and economic development. Upon these two pillars, he will create a national architecture for human flourishing that is unprecedented in our national history.

Based on these two pillars, he will erect a national agenda which, apart from national security and economic development, will include healthcare, education agriculture and food security, infrastructural rural and urban development, technology, innovation and digital economy, and nation building.

Guided by the unprecedented investment in human security, the integration of the eight areas of this carefully planned agenda for national reawakening will, within four years, unleash unparalleled human resource that will make Nigeria proud of their motherland.

It bears repeating that Nigeria has the required manpower, both at home and abroad to accomplish this agenda.

Under his leadership, we will mobilise Nigeria’s immense human and natural resources to rebuild our education sector, healthcare, infrastructure, including electricity, roads and water supply.

Some of the presidential aspirants have been promising to fix Nigeria, some hope, some unity, some better life and so on, but stakeholders across the political divides testified on May 5, when Amosun declared that we need a trail blazer and someone that Nigeria would be safe in his hands.

Testimonials from distinguished Nigerians testify to the fact that Amosun is the competent leader Nigeria needs. Many agree with Amosun in his priority of human security and accelerated economic growth and development as a way out of the doldrums we are in the country.

Going by the overwhelming felicitations and support received by Amosun across the divide as well as full representation from the Alake of Egbaland, Oba Adedotun Gbadebo; former President Olusegun Obasanjo and a former governor of Oyo State, Rasheed Ladoja; federal lawmakers, youths and women groups in the country as well as religious leaders, the signs are clear that the pains of Nigerians are over.

OKADA BAN: READ WHAT LAGOS AREWA COMMUNITY RESOLVED AT THE END OF THE EXTRA ORDINARY MEETING

OKADA BAN: READ WHAT LAGOS AREWA COMMUNITY RESOLVED AT THE END OF THE EXTRA ORDINARY MEETING