For the second year running, Nigeria’s most consistent and most prominent premium frontline all gloss brand and marketing communication journal, Brand Communicator Magazine was awarded the prestigious PR Magazine of the Year Award by the Nigerian Institute of Public Relations, NIPR, Lagos State chapter at this year’s Hat Trick edition of the most prestigious PR industry awards, the LaPRIGA. 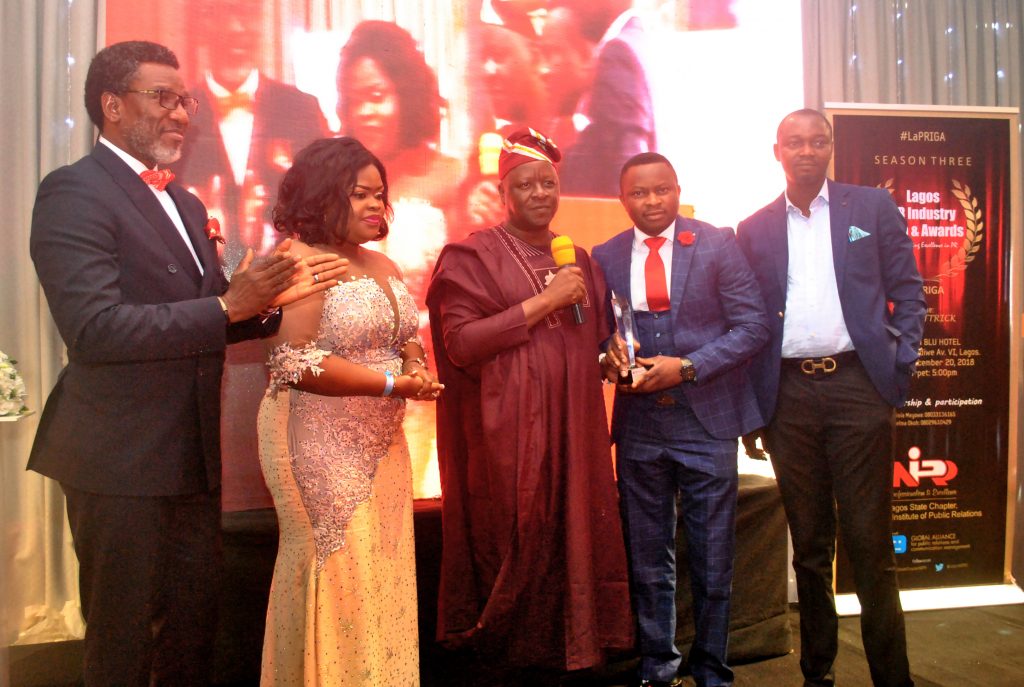 According to the organisers of the Lagos PR Industry Gala and Awards, LaPRIGA, the prizes are administered by the Advisory board of LaPRIGA made up of individuals with impeccable character and requisite academic and professional accomplishments. Presenting the award to Brand Communicator, the Lagos state Commissioner for information and Strategy, Honourable Kehinde Bamgbetan said, “this LaPRIGA award is presented to Brand Communicator for upholding the highest professional standard in publishing and journalism, engaging minds building relationships and transforming marketing decisions.”

Welcoming guests to the gala, Chairman of the Lagos chapter of the NIPR, Mr. Olusegun McMedal expressed his gratitude to members and other stakeholders of the chapter who have made the gala a success. While stressing that the chapter will continue to up the ante in the industry, he said that the Executive Council remains committed in helping its members stay ahead of trends in the industry through thought leadership lectures, career enhancing initiatives, networking opportunities and celebrating deserving practitioners.

Responding on the award, Brand Communicator’s Senior Business Development Executive, Tolulope Egbewunmi thanked organisers for the awards, stating that this will spur the team to work harder. “This award shows that our efforts in projecting the industry and promoting excellence have not gone unnoticed. We are thankful to the Lagos NIPR. This will spur us to do much more going into 2019.”

In his reaction, the Publisher of Brand Communicator, Joshua Ajayi had this to say: “This is a wonderful way to cap an eventful year for us at Brand Communicator. For me, winning this award for the second year running shows that we have maintained our consistency and we can only do better. For this award, I give thanks to God for given us the enablement to accomplish all we have done. This award is dedicated to the team at Brand Communicator, the best in the world, and to all who have supported us in the industry.”

In the first category of the awards presented by the Lagos state, Commissioner for Information, Hon. Kehinde Bamgbetan, Thisday Newspaper’s Editor for Brands and Marketing, Raheem Akingbolu was honoured with the award for the PR Journalist of the year.

Other awards were also given at the event. For his numerous pioneering roles in the perception industry in Nigeria, the Chairman and Chief Executive Officer of C&F Porter Novelli, Nn’emeka Maduegbuna who has had over three decades of experience in strategic communications planning, corporate positioning and reputation management, as well as extensive practice in the areas of issues and crisis management and litigation communications, was honoured with the LaPRIGA Lifetime Achievement award.

For the Best Support for Public Relations award category where outstanding organisations that have supported the growth of PR practice are honoured, Superscreen, FirstBank of Nigeria and the Indomie brand were honoured. The LaPRIGA award for the Best Agency to Work was won by three agencies. These include Africa Practice, Brooks and Blake and Quadrant MSL Company. The award for Best PR Agency Using New Media was won by Black House Media.

The Best Training Consultancy of the Year award went to Business Education Evaluation Council, the prestigious LaPRIGA Model Agency of All Time was given to C&F Porter Novelli, while the Special Professional Recognition Award was given to the Managing Director of Skyway Aviation Handling Company, SAHCO, Basil Agboarumi.

The event which held at the Radisson Blu Hotel on Victoria Island had prominent Nigerians as well as professionals in the industry in attendance. Among them are the gubernatorial candidate of Lagos State of the PDP, Jimi Agbaje, APRA President, NIPR President, Mukhtar Sirajo, APRA President, Yomi Badejo-Okunsanya, among others.

LaPRIGA is a high profile red bow-tie event which has evolved to become the communications industry Oscars aimed at recognising excellence, celebrating practitioners, corporates and stakeholders via awards dinner, and to boost professionalism and more investments in the practice.

Why Bello-Koko Is the Cynosure of Attention By Nuhu Abdulkadir