The ex-husband of Nollywood actress Mercy Aigbe, Lanre Gentry, has come out to post a very fishy post that has got Nigerians suspecting he is throwing shades again at his ex-wife.

Lanre shared a post that used the analogy of a key and padlock to explain the difference between a woman who keeps many sexual partners and a man who does same.

The photo he shared had a text that reads: 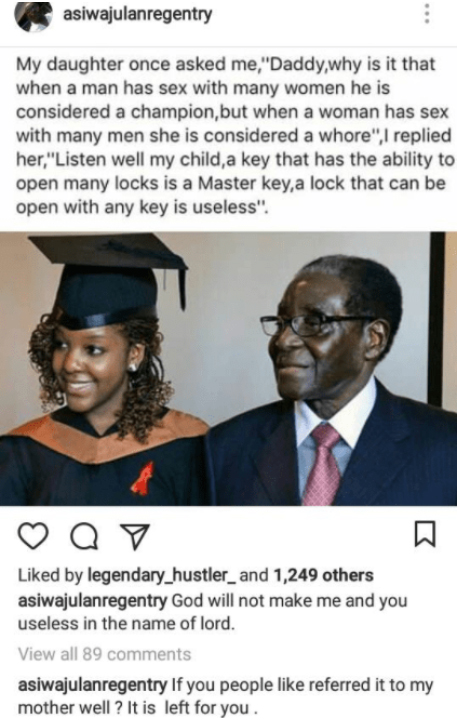 In the caption, Lanre Gentry wrote:

God will not make me and you useless in the name of lord.

The hotelier did not call names but his followers believe he is referring to his estranged wife and they said so in the comment.

Recalling, Mercy Aigbe has taken to social media to mark 1 year of a domestic abuse-free life.

– In 2017, she revealed how she was constantly abused by her estranged husband
– Well, she recently took to social media to celebrate, thanking God for the the strength of forgiveness and healing

In 2017, Mercy Aigbe trended on the internet, not for her acting prowess but for the much publicized crash of her marriage to Lagos businessman, Lanre Gentry. The actress revealed how she was constantly beaten and abused by him and for a brief period, he was arrested and even served a restraining order.

Pictures of her bruised face and body flooded the internet as there were a lots of word exchange filled with ‘she said he said’ . At that point, it was clear that yet another celebrity marriage had come to an end.

Well it’s been a year since the beautiful actress left the marriage and she seems to be nothing but happy about it. She recently took to social media to mark 1 year since she walked out of the abusive union, thanking God for the strength to move on.

Sharing photos of her then bruised face, she wrote: “A year! Thank you Jehovah for grace, for the spirit of forgiveness, for total healing,for strength and above all for Life!……..You are worthy to be praised #amazon #victor#beautyforashes #mercified