Land Use Charge: Outrageous Amount In Circulation Unfounded, Based On Arrears – LASG

The Lagos State Government on Wednesday clarified the figures
circulating in the media on the rate for the newly reviewed Land Use
Charge Law of 2018, saying many of the numbers were based on several
years of arrears on the levy not paid by affected property owners.

Speaking at a news briefing held at the Bagauda Kaltho Press Centre in
Alausa, Ikeja, the State’s Commissioner for Information and Strategy,
Mr Kehinde Bamigbetan said there were so many misconceptions and
misinformation about the new law, adding that the law was a progressive
enactment duly made by the House of Assembly and handed over to the
Executive for implementation in the overall interest of the people.

He specifically dismissed the humongous figures being bandied about on
the social media, saying many of the calculations were based on arrears
of many years of non-payment.

“The fact is that this law took a long process to be made. It started
as a bill and went through the first reading, second reading, public
hearing to which all stakeholders were brought together to debate it and
some of the relieves we have seen were part of the debate expressed by
the stakeholders about the need to protect the vulnerable segment of the
society. Having made the law, the Lagos State House of Assembly has
handed it over to the executive to implement.

“The second important part is that a lot of relieves have been built
into the law but many people are confusing arrears with the actual
figure. If you see those figures, ask whether it is for one year or
arrears of several years of non-payment. The humongous figures that are
being bandied around particularly in the social media relate to the
arrears of many years of non-payment which are computed together,”
Bamigbetan said.

Also speaking, Commissioner for Finance, Mr Akinyemi Ashade said the
government has extended the period for tax payers to enjoy the 15 per
cent discount in the reviewed Land Use Charge Law to April 14, 2018 in
order to enable the implementation and enforcement of the new law, as
well as allow many property owners to benefit from the discount.

Ashade, who took time to clarify reactions in some section of the public
on the new law, said under the old law, which had not been reviewed for
over 15 years since 2001, the Land Use Charge rate was totally
inaccurate and retrogressive and was depriving the State of keeping
track of all economic activities that relate to land in Lagos State.

He said the Law, which was reviewed by the Lagos State House of Assembly
and signed into Law by the State Governor, Mr. Akinwunmi Ambode on
February 8, 2018 is a merger of all Property and Land Based Rates and
Charges in the State.

Ashade said: “There was an urgent need for the repeal, as the old law
had not been reviewed for over 15 years, since 2001. Under the old law,
the LUC rate was totally inaccurate and retrogressive which deprived the
State of keeping track of all economic activities that relate to land in
Lagos State.

“The new law is a consolidation of Ground Rent, Tenement Rate, and
Neighbourhood Improvement Levy. This charge is payable annually in
respect of all real estate properties in the State, which means owners
and occupiers holding a lease to a Property for ten (10) years or more
are now liable to pay the annual LUC invoice charged.

“Thus, the Tenement Rates Law, the Land Based Rates Law, the
Neighbourhood Improvement Charge and all other similar Property Rates or
Charges, Laws or amendments to any such property Laws shall cease to
apply to any property in Lagos State as from 2018.  Nonetheless, all
pending invoices, orders, rules, regulations, etc. under the 2001
repealed Law shall continue to be in effect until such obligations are
discharged.”

Explaining the calculation of amount payable, the Commissioner said that
property owners can determine the amount by multiplying the Market Value
of their property by the Applicable Relief Rate of 40 per cent and
Annual Charge rate.

“Upon receiving a notice or not, the new law has made it possible for
owners to calculate their charge, and enable prompt payment, which
allows them to benefit from a 15% discount for early payment, applicable
to payments made within 15 days of receipt of Demand Notice,” he said.

Responding to fears of tenants that the new Law might force landlords to
increase rent, Ashade said aside the fact that the Lagos State Tenancy
Law 2011 was still in force, the incidence of payment for Land Use
Charge under the new law is on the Landlord and not the tenant.

He said the minimum rate was only increased from N1,200 it was in 2001
to N5,000, while there is provision for self-assessment and Assessment
Appeal Tribunal under the new law. 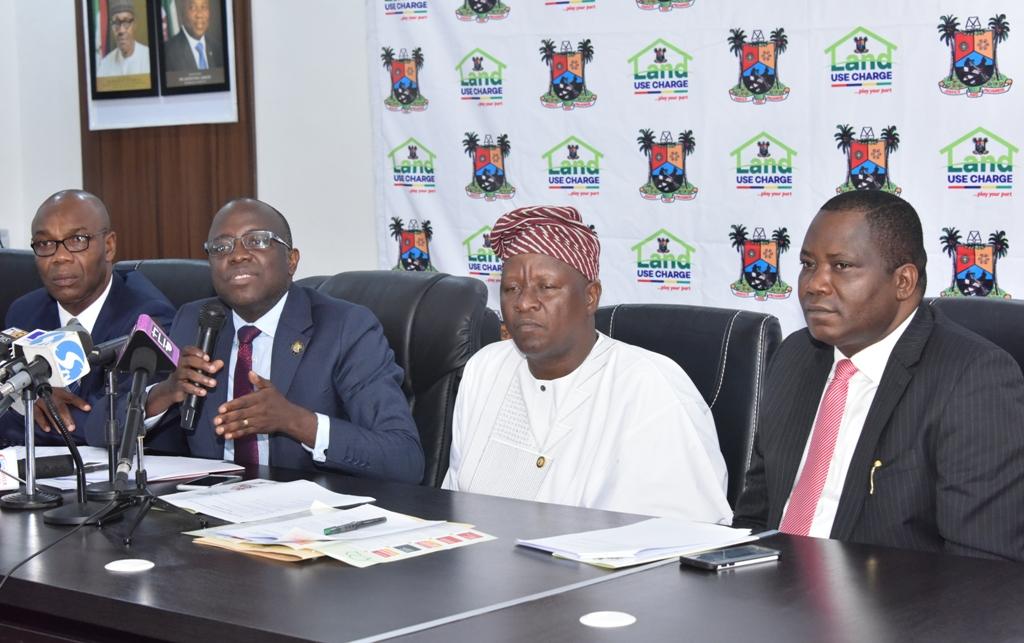 L-R: Special Adviser to the Governor on Taxation and
Revenue, Mr. Fola Lasisi; Commissioner for Finance, Mr. Akinyemi Ashade;
his counterpart for Information & Strategy, Mr. Kehinde Bamigbetan and
Special Adviser to the Governor on Information & Strategy, Mr. Idowu
Ajanaku during a press conference on Land Use Charge at the Bagauda
Kaltho Press Centre, Alausa, Ikeja, on Wednesday, March 7, 2018.