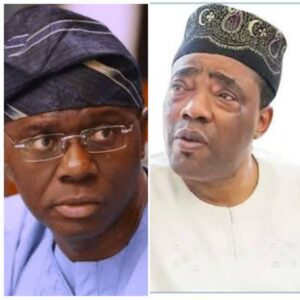 Today, in the Lagos State chapter of our great party, the All Progressives Congress (APC), is a very important and significant moment. This is because we are taking a step of faith – faith reinforced by evident hard work, responsible leadership and testimonials of many years of unbroken promises.

It is not by accident that Lagos is calledNigeria’s melting pot, and to boot, her commercial nerve centre. Tolerant, accommodating and progressive, courtesy of our great party that, has been through many transformations in our current democratic experience, Lagos is by all standards, the nation’s pacesetter and trail blazer state, in terms of development and leadership, in addition to her rich aquatic splendour.

However, four months from now, history willbe made again in the annals of our body polity in Lagos, when our diligent governor, Mr. Babajide Olusola Sanwo-Olu, will be re-elected for another good turn of four years. But this is not automatic.

We are though confident of our record upon which we hope to ride to victory in March 2023, nevertheless, it is not in our character to take anything for granted. Particularly noteworthy is the fact that Lagosians are not ingrates and would never repay good with evil. They not only see what our government of APC under Governor Sanwo-Olu has done and still doing; they can feel them as well.

Besides, it is not by error that we are identified as the progressives. We are known to plan, strategise and build sufficient safety into our assumptions, just so there is always an ace tofall back on, whenever the battle gets tougher. Regardless, politics, for us, is not a do-or-die affair.

The reason we are here today and being inaugurated is to lead the charge for our governor’s re-election. It goes without saying that all members of this campaign council are heavyweights and renowned personalities with name–recognition. What this means is that we are up to the task and confident of delivering, bearing also in mind that, we have been doing this seamlessly in our party for 23 years non-stop. Definitely, 2023 will not be different.

Without sounding overly arrogant, overconfident or immodest, our governor and party do not have any serious challenger in next year’s election in the state, if record and antecedents were to play a major role. This is not playing to the gallery. Yet, we will take nothing for granted and approach the election as if it’s the oxygen we breathe. This is a promise.

While thanking our National Leader, AsiwajuBola Tinubu and by the grace of God, the next President of Nigeria; His Excellency, Governor Sanwo-Olu and our party leadership for the honour to serve on this critical assignment, our campaign council in Lagos promises not to let you down and we willensure that our governor is re-elected, come 2023.

Thank you all for your time and God bless.

LSDPC @ 50: Sanwo-Olu, Ayodeji Joseph Take Stock Of Its Interventions In The Housing And Property Market

LSDPC @ 50: Sanwo-Olu, Ayodeji Joseph Take Stock Of Its Interventions In The Housing And Property Market