The Lagos @ 50 celebrations took a new dimension this week as the State Governor, Mr. Akinwunmi Ambode embarked on commissioning of several infrastructural projects across the State.
The projects, including network of roads, bridges, seven transformers, Street Lighting infrastructures, monuments and a recreation park, the Governor said was in line with his commitment to make life comfortable for residents irrespective of location within the boundaries of the State.
Among the projects commissioned from Tuesday and expected to climax on Saturday include Ijegun-Isheri-Osun-Isolo Road, Idimu-Ejigbo Road (Phase II), New Market Road, Camp Davies Road/Ishefun Road, all in Alimosho Local Government Area; Brown Road in Surulere; Adisa Ajibulu Road with Bridge and Kolawole Shonibare Street, Ajao Estate Road, both in Oshodi-Isolo Local Government Area.
Other projects include installation of new transformers in Ibeju-Lekki, Epe, Eredo, Agbowa-Ikosi, Igbogbo-Bayeku, Ikorodu and Olorunda areas as well as Ojuloge Monument located opposite National Arts Theatre, Iganmu; Empowerment Monument at Sabo, Yaba; Drummer Monument at Ebute Ipakodo Roundabout, Ikorodu and Badagry Recreational Park, Topo, Idale. 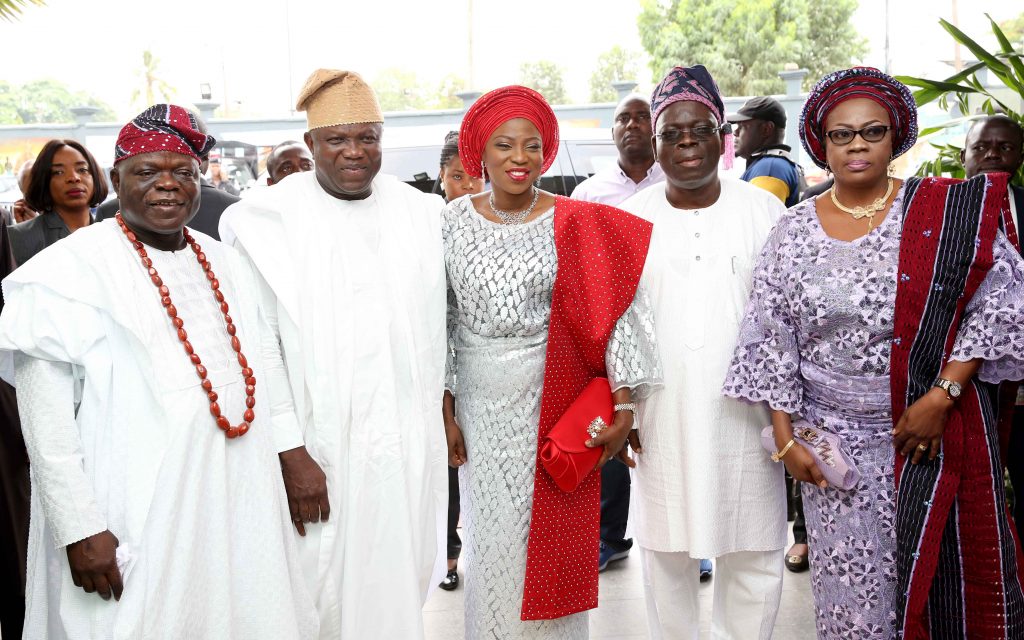 At the commissioning of Ijegun-Isheri, Osun-Isolo Road, the Governor who was represented by the Commissioner for Physical Planning and Urban Development, Tpl. Wasiu Anifowose said the delivery of the road project was part of the efforts of his administration to ease movement of people from one point to the other.
The dual carriage way road project, which included two bridges at Isheri Oshun and Ailegun junction, drains on both sides, service ducts and street lighting, among others, is a viable alternative route for people of Ijegun, Ijeododo and Isheri Oshun to link Apapa-Oworonshoki Expressway through Jakande Estate.
The road, which is with a total length of 6,500m long and average width of 20.350m, was also designed to significantly decongest traffic at the ever busy Ikotun junction.
He said the project would greatly improve connectivity and significantly reduce travel time as well as man hour lost due to traffic congestion in the area.
In his remarks, Onisheri of Isheri-Olofin, Oba Abdulwahab Balogun commended Governor Ambode and his team for purposeful and visionary leadership they have been offering the people, saying that it was evident that all parts of the State had been transformed.
While commending the quality of the work done on the project, the Monarch said the road would greatly relieve Ejigbo, Ikotun and Ijegun of the perennial traffic congestion in the areas.
Governor Ambode also commissioned Brown Road in Coker Aguda Local Council Development Area (LCDA) which is a link road to about 12 other roads in the area and also expected to connect the ongoing Blue Line Rail Project.
Represented by his Special Adviser on Central Business District (CBD), Mr. Agboola Dabiri, the Governor urged residents to take possession of the road while assuring that the Government remains committed to fulfilling all its electoral promises to residents in the State.
The Governor recalled that in the last two years, his administration had remained focused on the promise to provide good governance and make life more comfortable for the people and vowed not to relent in delivering dividends of democracy as well as taking the State to a greater height.
“Let me emphasize that this road projects we are witnessing its commissioning today is tax payers’ money in action. It belongs to you. We have only ensured that the funds which you have made available to us through the payment of your taxes are judiciously utilized in the best interest of the people,” he said.
“The present Governor and his team are doing very well. They have started very well and we are happy with them. We are proud of the Governor and we wish him well,” Oba Balogun said.
Commissioner for Information and Strategy, Mr. Steve Ayorinde who represented the Governor at the commissioning of the 600metres Kolawole Shonibare Road, Ajao Estate noted that the project was conceived to alleviate the plights of the Citizenry, provide alternative routes that will improve road connectivity, reduce traffic gridlock at Oke-Afa junction and improve socio-economic activities in the area.
The Governor also commissioned the Ojuloge Monument Park opposite the National Arts Theatre in Iganmu, where he reiterated the commitment of his administration to enhance the tourism potentials of the State.
The Governor, who was represented by his Special Adviser on Urban Development, Mrs Yetunde Onabule, said the iconic structure was designed to educate the Nigerian youths, residents of Lagos and visitors that the culture of the State celebrate womanhood and does not tolerate any kind of violence against women or gender abuse.
The monument was made in honour of the much talked about Lagos women popularly called Sisi Eko. It conveys the sense of beauty, grace, style and passion for fashion of Lagos women.

POLIO: LASG Set For Implementation Of Second Round Immunization Campaign