Kemi Olunloyo: You did not buy the SUV you promised for all the pimping I did for you – Cossy Ejiokor tells Port Harcourt based Pastor 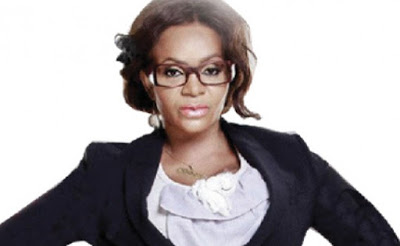 Controversial Nollywood Actress, Cossy Orjiakor, has threatened to release her statement of account, where the name of Popular Nigerian Pastor, David Ibiyeomie showed, should US trained journalist, Kemi Olunloyo be kept in prison this Easter period.
Mr. Olunloyo, on Friday wrote a letter from prison, lamenting she was suffering.
In the letter Olunloyo, thanked Orjiakor and Cool FM OAP, Daddy Freeze for their support.
The controversial journalist has since been detained for over two weeks now after she was arrested for allegedly defaming Pastor David Ibiyeomie of the Salvation Ministry, based in Port Harcourt, Rivers State.
She was granted bail by a Magistrate’s Court in the city last week but was immediately rearraigned by a Federal High Court still in Port Harcourt.
Miss Orjiakor, who has been calling for Kemi’s freedom, wrote on her Instagram page, “To whom it may concern, this really got me.
“I have never met this annoying lady, never spoken to her on phone, but here she is thanking me for absolutely doing nothing.
“I’ m seriously moved. I wish I can perfect her bail.
“But why will I have to stress myself when I know you will do it.
“My case is similar but different to hers, I can identify with her in this case, just because I know things most people don’t know.
“Things they won’t believe, Mr? You are a famous Nigerian Pastor, It’s almost Easter.
“If this lady remain in prison this Easter I will boldly post my statement of account where your name showed.
“Thanks for the tithe money you sent to me.
“Besides you are not the first man of god to give me such offerings. I don’t run an NGO like the rest of your girls. I’ m a big sinner.
“So you obviously were not paying for my repentance.
“HELP? Don’t even say that because I’m a middle class lady and am 100% better than some of your church members, those are the ones that need help, anyway.
“You did not buy the SUV as you promised, for all the pimping I did for you.

“So I don’t have any obligation to keep your name secret anymore.
”Release hnn.#freemadamkoo @hnnafrica, please hopefully she will trend with care in her future stories.

”Besides, my buddy have this account password and will continue where I stop. If harm come to me.
”And if madam Kemi is freed I will never mention your name. Ever again, I SWEAR.

“Even in my little gossips, I will forever keep calm. Though my book will still come out.
“But it will focus less on you. Thanks in anticipation. Your ex-pimp, Cossy.”
Previous Post