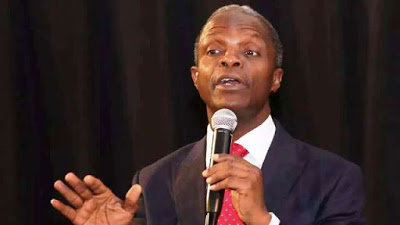 Vice
President, Professor Yemi Osinbajo on Monday identified delay in the
administration of justice as a major challenge that must be jointly
tackled by all relevant stakeholders in the justice sector, just as he
urged judges, lawyers and others to change their attitudes and stand up
for what is right.
Speaking
at the opening ceremony of a two-day Stakeholder’s Summit organized by
the Lagos State Ministry of Justice at the Convention Centre of Eko
Hotels and Suites in Lagos, Osinbajo, a Senior Advocate of Nigeria
(SAN), said stakeholders in the administration of justice must now begin
to take the issue of delay more seriously and shun all forms of delay
tactics.
Osinbajo,
who was the keynote speaker at the summit with the theme: “Contemporary
Trends: Catalysts For Justice Sector Reform in Lagos State,” called on
the judiciary, as a way out of the problem, to embrace day-to-day system
for trials and heavy punishment for deliberate act of delay aimed at
stalling cases.
The
Vice President, who was represented by the Attorney General of the
Federation and Minister of Justice, Mr. Abubakar Malami (SAN), said it
was also important for the judiciary to introduce significant costs for
delay occasioned especially by lateness, ill-preparedness or deliberate
tactics.

While alluding to plethora of statistics and
judicial decisions especially a 2014 English Court of Appeal judgment
where it was stated that ‘cases take up to a generation to be resolved
in Nigeria occasioned by catastrophic delays,’ Osinbajo said
stakeholders must now resolve to address the issue of delay once and for
all in the collective interest of all.

He took a swipe at some
judges who would not sit on time and rise early and lawyers who file
frivolous applications and employ other delay tactics as well as shoddy
police investigation, and admonish them to desist from such.

“If
we can agree that these problems are against our collective interests
as practitioners and stakeholders, then we must make a firm commitment
to tackle the problems by changing our attitude and standing up for what
is right,” Osinbajo said.

Speaking on the summit, the Vice
President said Lagos State had a general reputation for trailblazing
reforms in the justice sector and in many other sectors in Nigeria and
beyond, adding that the summit, which is aimed at further initiating
reforms in conformity with modern trends, was another testament of the
fact that the reputation of the State was being taken seriously by the
current administration ably led by Governor Akinwunmi Ambode.

He
said even though Nigeria was just clawing its way out of recession, it
was gratifying that the State Government deemed it important to invest
in the summit to address some of the institutional challenges preventing
the country from developing a first-class justice system in its
commercial nerve centre.

In his address, Lagos State Governor, Mr.
Akinwunmi Ambode said for any nation to experience economic growth, it
must first have a functional judicial system that would not only
encourage local and foreign investors to invest in, but also guarantee
conducive environment for such businesses to thrive.

Governor
Ambode said experience over the years has shown that societies with
equal and unhindered access to justice have a better environment for
economic growth and poverty alleviation than those that do not.

This,
he said, prompted his administration to prioritise justice and security
reforms, not only to maintain law and order, but basically to carry out
the various developmental projects that would make Lagos safer and more
prosperous.

“As a government, we are well aware that to achieve
our socio-economic goals of a safer, secured, peaceful and more
prosperous Lagos State, we need a functioning justice sector, which
guarantees not only the maintenance of law and order, the enforcement of
human rights and freedom, but also provides an administration of
justice ambience that protects investments and encourages economic
development.

He
listed some of the major challenges currently being faced by investors
and entrepreneurs include the ease and cost of doing business and over
regulation of business processes, saying that the Summit was not only
timely but a veritable platform for experts to proffer solutions.

“We
are mindful of the need to attract foreign investment, and public
private investment, especially in the area of provision of
infrastructure. No economy can develop without sustained infrastructural
development. I firmly believe that discussions around all these issues
are pertinent for this august gathering,” the Governor said.

Besides,
Governor Ambode said his government was working round the clock to
ensure a system where all justice institutions in the State are fully
automated, alluding to the fact that global strides in commerce and
information technology have transformed the world into a global village.

“One
of our top priorities is to leave behind a legacy of a 21st century
justice sector driven by digital technology and powered by digital
literate judicial officers and legal services providers,” he said.
One
of such technologies being put in place, Governor Ambode said, was the
Lagos State DNA Laboratory to process DNA evidence, just as he expressed
optimism that it would serve as a powerful criminal justice tool in
prosecuting the guilty and exonerating the innocent.

“This
will also act as deterrence to criminals whose DNA data are in the DNA
database, ultimately, playing a key role in the systematic reduction of
crime in our State,” Governor Ambode said.
Previous Post