Jungle Justice: One Badoo Down

It was a sad day for humanity in Ikorodu, Lagos when suspected member of the deadly Badoo group was mobbed and lynched to death…
According to posts on Ikorodu Ambassadors Group on Facebook, the suspected kidnapper was caught and the crowd prevented the police from intervening and whisking the suspect away.
Here’s how they reported it;
Live Pictures from Oni-Ogunsanya Street, Olomomeje Mosque Area, Aga in Ikorodu.
Where a suspected Badoo Member has been arrested by the Vigilante Group of Ikorodu popularly known as the Onyabo.
The general public are preventing the Police, SARS and the Vigilante from taking the suspect away, they are challenging them.
Two people have just been hit by a stray bullet that was shot to disperse the crowd, one was hit on the hand and the other on the head
Another post read…
The Suspected Badoo member was eventually killed and burned by the angry crowd.
And a subsequent post read…
The suspected Badoo Member inside the Onyabo’s Office before he was killed and burned by the angry crowd.
Onyabo is an outfit of the Vigilante Group of Ikorodu. 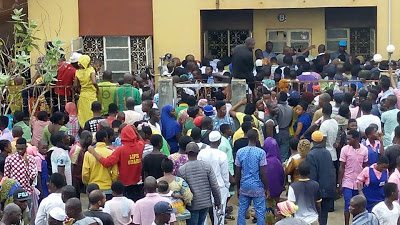 Alleged Corruption: Ekiti students back Fayemi's probe, say court must not shield him

Alleged Corruption: Ekiti students back Fayemi's probe, say court must not shield him