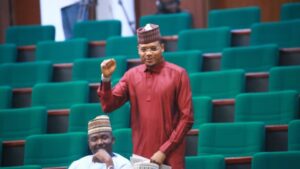 The time for change is now!

Already, the political landscape is coming to life with various moves and caprices of political gladiators as they get set to battle it out for the hearts and votes of the people in the coming general elections in 2023.

For the people of Oyo North Senatorial District, it is a chance at the shot to change the guard and bring in fresh representation at the apex chambers of the National Assembly. And why not? A veritable replacement beckons at the horizon. Just like in the round leather game known as soccer where the coaching crew wastes no time and substitutes when a change of tactic is needed.

A good alternative presents itself in the viable alternative of an enigma, a tested and trusted player in the person of the irrepressible Honourable Shina Abiola Peller, a man, who currently represents the Iseyin/Itesiwaju/Kajola/Iwajowa Federal Constituency of Oyo State in the House of Representatives.

Quite interestingly, Shina Peller’s trajectory of ascension to this position tells you the kind of person he is and his exploits and achievements so far are testament to how much he is revered.

Going strictly by the rotation and zoning system in place, his local government, Iseyin Ifesowapo did not deserve the seat he currently occupies. But Peller is of no mean pedigree, and for that reason, there was no contention in allowing him to contest in that election where he won impressively with a landslide.

One can expect no less from the scion of the prominent Peller family and son of the late veteran magician, Professor Moshood Abiola Peller, who in his lifetime was known even beyond the shores of Nigeria for his breakthrough in the field of magic.

Only a man like Professor Peller could have fashioned a child who would possess similar acumen that would seek to outdo his father and bring renewed honour to the name.

Since his birth on May 14, 1976, Shina Peller has displayed an unusual amount of precocity even at a very tender age. There was no specialty to him as everything was fun and a challenge.

It is no wonder that it is in this young, whiz politician of astute character and irrepressible personae that the people of Oyo North are looking up to occupy the seat of Senate.

It would be remembered that the senatorial district is made up of two zones, one with three local government areas and the other 10. The incumbent, Senator Buhari Abdulfatai from Ogbomosho, even with just three LGAs has served for two terms, based on the goodwill of Okeogun LGAs and their votes.

This time, though, the tune has changed as the 10 LGAs want to use their political strength to win the seat for one of their own, and of all the sons of the land, Shina Peller takes the lead in truly having what it takes to lead.

Taking a look at Peller’s viability as a candidate, one would realise that being chosen as the people’s man is a no brainer. Renowned Lady Peller, Shina’s mother is a native of Okeogun II with deep roots in the community. Her father in his lifetime was the Chief Imam of Kishi in Irepodun Local Government. This is without forgetting that Peller acquired his first degree in Chemical Engineering, and then master’s degree in business administration both from Ladoke Akintola University of Technology (LAUTECH), Ogbomosho.

With such quality roots in the community, Peller’s call to service is no surprise.

Already, reports indicate that academic staff, non-academic staff, alumni and students of LAUTECH are ready to deploy their strength and resources into ensuring Shina Peller gets the seat in order to continue his consistent support to the school. This is asides from the fact that the school will like to have an Alumnus representing the district the school is situated as their senator.

Most impressive however is the stance of top APC chieftains in Oyo State, who are already making daily appeals to Peller to run for a second term as House of Representatives member. Of course, while this may be their wish, Peller is bent on not going against the zoning pattern of his constituency.

The past two representatives, Hon. Kola Olabiyi and Hon. Supo Abiodun have been from Iseyin and Itesiwaju. Peller, who hails from the same place as his predecessors believes that it is only fair that Kajola and Iwajowa be given the chance to have their turn.

With all of these factors in play, it is no surprise that the people have turned their searchlight to Shina Peller after he hearkened to the desperate call and passionate appeal of his people to lead the Oke-Ogun geo-political zone in the war from political emancipation in the 2019 general elections, where he contested for House of Representatives seat of Iseyin/Itesiwaju/Kajola/Iwajowa Federal Constituency, Oyo State under the platform of the All Progressive Congress (APC) and won with a landslide victory.

Beyond these, he has proved to be a man of the people who understands where the shoe pinches when it comes to his people and Nigerians in general. Some of the notable motions and bills he sponsored in the house proved these. Notable among motions and bills he has sponsored are the motion on the urgent need to investigate the unrest in Iseyin caused by the killing of indigenes by men of the Nigerian Customs Service; Bank Employees etc (Declaration of Assets)(Amendment) Bill 2021 – which passed through first reading; and the motion on ecological degradation, which was moved after the incident of erosion that claimed two lives in Okeho on June 22, 2019.

Others include a motion on the need to tackle the scourge of rape and sexual offences in Nigeria. This has subsequently prompted the federal government to launch the first-ever National Sexual Offence Register in the country.

In his quest to address the poor state of primary health care service across the country, particularly at the grassroots, which is characterised by lack of healthcare facilities and inadequate manpower, Hon. Shina Peller moved a motion on the floor of the House praying that the House investigate the utilisation of the Basic Health Care Provision Fund made available by the federal government. The House granted his prayer and passed it on to the appropriate committee for investigation and further legislative actions.

A bill was also sponsored by him seeking an amendment to the Universal Basic Education Act 2004. The bill was presented by him on 13th of February, 2020, and it has passed through first reading; he has a bill for an act to establish the Federal Polytechnic, Iseyin and it has passed through first reading; his bill for an act to amend the National Orientation Agency Act has also passed through the first reading, and his motion on the need to reinvigorate the National Orientation Agency for impactful discharge of its mandate was also adopted by the House.

Despite not being a chairman or deputy chairman of any substantive committee in the House, Hon. Peller’s has been phenomenal. His notable performance in delivering proper dividends of democracy and creating a proper channel of communication between him and his constituents has earned him multiple awards, such as the most Promising House of Representatives Member awarded to him by the Democracy Heroes Awards, the Peace Builder Award for Excellence in Community Development by Peace Achievers International Award.

Even without a political appointment, he had served them in ways so profound he received multiple commendations.

Though feelers out there have not shown clearly that Peller is going for the Senate, it is clear from his posturing that he intends to keep to his word in bearing with his persona and integrity by not returning to the House of Reps as agreed before his elections. It is also clear that the people of the Oyo North Senatorial District will not miss the chance of having the tested and trusted young politician from Iseyin represent them where it matters most for their development, proper representation and prosperity-the red chambers

SANWO-OLU ON NIGERIA@61: ” We cannot continue to retreat into tempting ghettoes of sectionalism, ethnic, religious bigotry”