I'm 100% with the presidency on proposed budget — Dogara 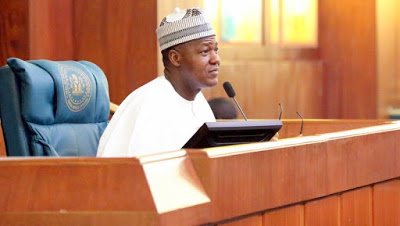 Speaker of the House of Representatives, Yakubu Dogara has assured
that the Nigerian lawmakers would give total support to the presidency
in the ongoing deliberations over the 2017 proposed budget.

Mr.
Dogara said the National Assembly took this decision because most of its
members and Mr. Buhari all belong to the same political party, the All
Progressives Congress.

“I must say that the APC as the party with
majority in the National Assembly will not allow Mr. President and the
APC as the ruling political party to be humiliated or defeated on its
budget priorities as we are all part of the same government,” Mr. Dogara
said.

He made the comments when he addressed a round-table on the
N7.29 trillion budget proposal organised by governors on the platform
of the APC in Abuja Monday morning.

The Speaker also noted that
lawmakers across political aisles believe that constituency matters are
very crucial to their activities as lawmakers.

“It is however,
important to stress that on budget matters members of the National
Assembly tend to be very sensitive to their constituency
representational functions, irrespective of party,” Mr. Dogara said in
an apparent reference to the controversial culture of earmarking funds
for lawmakers to carry out projects in their respective constituency.

The
practice has come under heavy criticism in recent years, and the call
for its abolition peaked in the wake of the budget padding scandal that
broke out in 2016.

Critics say the so-called constituency projects
line items mostly serve as a conduit for lawmakers to syphon public
funds into their pockets because they are often poorly executed or, in
most cases, never carried out.

Mr.
Dogara updated the governors on the progress so far made by the
National Assembly in the ongoing debates about the 2017 budget and
promised better transparency and accountability in its passage and
implementation.
Previous Post