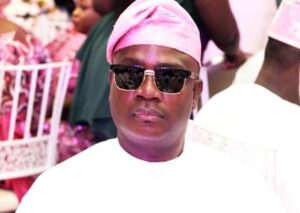 Businessman and politician,Asiwaju Rotimi Ajanaku has expressed interest in running for the Federal House of Representative slot of Ibadan North West/South West Federal Constituency under the APC party platform.

Here is his letter to APC leaders and stakeholders:

Great leaders of our party, Delegates and party men and women, my first attempt began in 2005, prior to the 2007 general elections. And since then, it has been a consistent aspiration which has always be characterized appeals and persuasions by the leadership of the party to step down for one candidate or the other despite the overwhelming grassroots support which my aspiration have always commanded and enjoyed.

I wouldn’t want to bore you with specific stories surrounding each of the previous four attempts, as, to the glory of God, many of you were all living witnesses.

This time around, I want to earnestly seek your total and unflinching support, as we all journey and work together to make our federal constituency a model to all others in the federation.

My great leaders, all strategies to make the election a worthwhile against the opposition parties, if given the ticket, are being perfected. And by the special grace of God, I would leave no room for regrets, as I owe it as duty and great responsibility to fulfill all my promises made to your leadership, our great party and the good people of Ibadan North West – Ibadan South West Federal Constituency.

In conclusion, I want to make a very passionate appeal to the leadership of our great party, at all levels in the state, to hasten up all the processes of reconciliation for us to have only one and indivisible All Progressives Congress, APC, in our various wards, the thirty-three local governmente and Oyo State, as a whole, as 2023 general election is fast approaching.

May God Almighty, in His infinite mercy crown the efforts made so far, in that direction and graciously allow peace and impecable love to reign in our great party, as we are set to wrestle power from the conservative elements presently in power in our Pacesetter State.

Thank you and God bless.