I embraced crime after my wrongful dismissal, says ex-cop (Photo)

A former Mobile Police Officer, Mr. Emenike Vincent, said he was framed up and dismissed, which forced him into the crime world. The suspect claimed to have taken to crime, using his uniform because he was wrongfully dismissed. Before his dismissal, Vincent was with Mobile 18, Owerri, Imo State. He was sacked for allegedly corking and pointing his rifle at his superior. The dismissed officer was one of the suspects paraded by Abia State Commissioner of Police, Mr. Anthony Ogbizi. 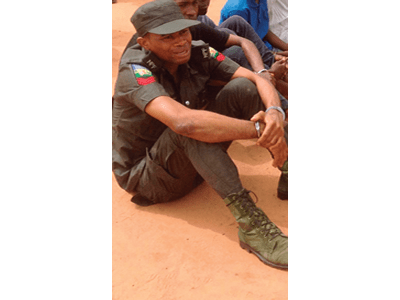 I was dismissed maliciously on the flimsy allegation that I corked a gun against my superior officer. That was not true! There was no evidence to support that, yet I was dismissed. My wife met some people who offered to help. She gave them money to review my case, but at the end, nothing was done. I also went to Abuja myself to see a man who promised to help me, still I was dismissed.” Vincent added that he was arrested in front of his mother’s house in Aba. On how he came to keep the uniform that he was supposed to submit to the authorities after being dismissed, he said: “I had two pairs of police uniforms; I submitted only one before leaving the Force.”

But Ogbizi said: “The dismissed policeman told us that he leads a gang that uses tricycles to terrorise residents of Aba, while in police uniform. The general public has been reporting robberies by men in police uniform. Vincent is one of them.” Ogbizi said Vincent was arrested while three of his gang members escaped. The police boss said that his men were on the trail of the fleeing suspects, vowing to rid Abia State of criminals.

Benue’s land belongs to its people, no one can take it – Ortom