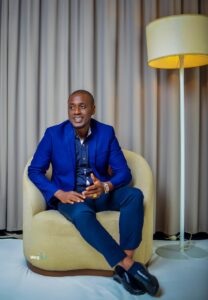 Humility is the absence of pride and the ability to be down-to-earth and modest under all circumstances. This, Hon. YUSUF OLASENI exhibited through his respectful behavior towards others.

PiPO as he is fondly called by admirers doesn’t think he’s superior to others despite his level of affluent as a young chap. He’s devoid of arrogance and self-praise.

A son of the soil and an Aworian. He grew up within the present Mosan Okunola LCDA. He is one of the few youths in Alimosho Federal Constituency that has the interest of his community at heart.

He never allowed his parents affluence to get into his head and became a menace to the society but chose the grass to grace route. He did menial jobs which includes working in few oil and petrol stations as attendant supervisor in late 90’s and early 2000.

He garnered little wealth and subsequently embraced the tourism and hospitality industry after taking a diploma course at ANIS TRAVELS AND TOURS. He also holds a Bachelor of Science in Public Administration from the prestigious University of Lagos, UNILAG.

His quest to gather more on international exposure gave birth to his first visit to South Africa during the annual Tourism Expo, INDABA. The tour as an eye opener made him relocated to the Rainbow Nation where he delved into the sales of artificial hairs, GL chains, ear rings and other beauty accessories.

His financial success in the beauty product sales did not deter him from continuing with his tourism business and became a renowned ticketing agent in Nelspruit, Mpumalanga province, R.S.A.

His love for sports, especially soccer made him featured in few football tournaments with the locals around Ingodini, Kanyamazane. This made him more prominent within the vicinity.

His hard work and knack for self survival paid off handsomely and translated into chains of businesses which includes; Exportation, Bureau de Change, real estate, tourism, hospitality as well as fashion and beauty products distribution.

His business empire spanned across Canada, South Africa and Nigeria. His strong inclination of winners never quits and humble beginning placed him among the successful Nigerians in late Nelson Mandela’s country.

Hon. Yusuf Olaseni believes in charity, assisting the less privileged, widows, orphans and destitutes. After making it big in a foreign land, he mulled the idea of coming back to his father’s land and give back to the society.

Since his arrival, he has been contributing his quota to the development and growth of his immediate constituency, Alimosho.

A silent operator whose humanitarian gesture speaks volume with several underlining projects and programnes at hand.

He officially launched himself into Alimosho Federal Constituency politics through his base- Mosan Okunola LCDA with the finance and completion of the LCDA’s party secretariat at gate bus stop.

His overwhelming contribution came as a huge surprise to his constituents during the commissioning of the three bedroom flat edifice and witnessed by creme de la cream members the ruling APC.

To crown it all, he openly declared his unalloyed support for Asiwaju Bola Ahmed Tinubu as the next president of our country Nigeria.

With PiPO, Alimosho is blessed with a warm hearted son of the soil.

With PiPO, Alimosho is blessed with a warm hearted son of the soil.