How we killed Uber driver to steal his car 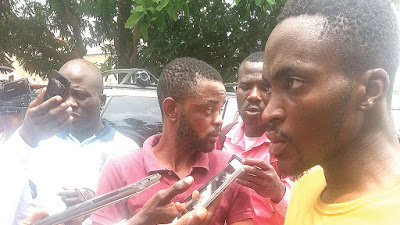 The long arm of the law has caught up with two men, who allegedly strangled an UBER driver to death in Lagos before stealing and escaping with his car to Edo State.

According to the Lagos State police boss, Fatai Owoseni, the cab driver, Ehobosa Alex, was killed on a Sunday at Fagba, Iju-Ishaga area of the state and his body was dumped by the roadside on Oremeji Street, Iju. The victim’s Kia Saloon car was then driven to Edo.

Owoseni told reporters at a press briefing yesterday that the suspects posed as passengers and when the driver got to the Ogba area, they strangled him and dumped his body by the road side at Oremeji Street. He said his men, who recovered the stolen car, were still on the trail of other members of the gang.

The suspects, Emmanuel Osas and Michael Irekpen, were arrested after the deceased’s red car was tracked to Edo. The suspects, alongside one Destiny, who is at large, had contacted the deceased, pretending to be passengers.

It was gathered that they lured him to an eatery at Obawole Street in Ogba around 9:00pm, where they killed him with a military belt. They were said to have beaten, stabbed and broken the driver’s teeth before killing him.

Narrating how they killed the victim, Osas said he tied his neck with the belt while he was driving, adding that they dragged Alex off the steering.“I was arrested in my village in Edo State. It was my first operation with them. It was Michael that introduced me into it. He told me his boss wanted to buy a car and that we should work towards stealing Alex’s car. Around 8:00p.m., we called Alex and told him to come to the eatery, near Michael’s house.

“When he came, I and Destiny entered the car first. Michael didn’t enter. I was holding the belt and I now tied the belt on his neck and passed it to Destiny. So, Destiny dragged him out and I took control of the steering because I was the only one who knew how to drive. After killing Alex, we took his body and dumped it at a church around 10:30p.m.

“Michael now called his boss that there was a car for sale. After speaking with his boss, he told me the man was not around. He said we should look for a place to hide it. So, I decided to take the car to my village. It was while I was in the village that the police arrested me last Thursday.”

Irekpen, who claimed he didn’t take part in the killing, said he washed his hands off the plot after they told him the driver was killed. “I didn’t follow them anywhere. I wasn’t even part of the plot. I only told Osas that my boss wanted to buy a car and we agreed to steal one so that we would sell to him. But when they went to carry out their plot, I didn’t follow them.”

We Meet Our Obligations Despite Economic Challenges – Ahmed