The ousted Managing Director of the Nigeria Ports Authority, Hadiza Bala Usman, not only gave Africa’s richest man, Aliko Dangote, an edge above his competitors using devious means, but also exempted him of sacrosanct charges, findings have shown.

Ms Usman, who had headed the lucrative agency since 2016, was on Wednesday suspended for alleged financial impropriety bordering on low remittance, misuse of office and bullying of operators. According to details of a letter sent to President Muhammadu Buhari by Nigeria’s transport minister, Rotimi Amaechi, the yearly remittance of operating surpluses by the NPA from 2016 to 2020 was “far short of the amount due for actual remittance.”

Mr Amaechi said within the stipulated years, the NPA recorded an outstanding unremitted balance of N165 billion (N165, 320, 962, 697). He thereafter suggested that the former NPA boss should step aside for the financial account of the agency to be investigated and audited.

Meanwhile, sources in the agency have said the travails of Ms Usman may not be unconnected to her buddy-buddy relationship with Mr Dangote, which had resulted in several waivers and exclusive benefits against the provision of the rules guiding the operations of NPA.

These actions, sources say, affected the revenue of the agency and consequently resulted in the the shortfalls in remittance as alleged by Mr Amaechi. While bank documents have shown her previous monetary transactions with the multi-billionaire, previous reports have exposed how Ms Usman hijacked terminals and suspended other’s contracts in favour of Mr Dangote.

In a leaked memo, Ms Bala-Usman compelled port operators to not only give preferential rates to Mr Dangote but also ensure that only him paid his charges in Naira while others pay their port charges in dollars, violating the laid down tariff plan of the NPA.

This newspaper further learnt that operators who were uncomfortable with the cronyism exhibited by the erstwhile MD protested in 2019 but were rebuffed.

In response to the agitations, the NPA, in a memo dated February 6, 2019, justified its exclusion of Mr Dangote on the basis of his proposed refinery, expected to be completed before 2022.

Titled “RE: APPLICATION OF MULTI PURPOSE RATES – DANGOTE INDUSTRIES LTD”, the memo affirmed that the agency cancelled the initial port charges applicable to cargoes for the Dangote refinery and compelled them to charge based on cargo type in line with multi-purpose tariff, which is lower and strange to operators.

“The Nigerian Ports Authority, and the Bureau of Public Enterprises are to streamline the payment of shipping and other fees at various terminals in a manner that ensures such fees are based on cargo type rather than on the basis of designation of terminals, to ensure that there is no loss of revenue due to the FGN based on terminals that importers choose to bring cargoes into the country.”

“Hence, the Authority therefore directs that all cargoes of Messrs Dangote industries Limited and indeed all other importers being directed to Onne Port for customs clearance, specifically for these projects, and are Multi-purpose in nature to be treated by applying the same operational rates used by other Multipurpose Terminals,” the memo read in parts.

Despite this concession and permission to pay in Naira as against other importers who pay in US Dollars, it was further revealed by sources within the NPA that Dangote Industries still owed about USD38million to the coffers of the NPA.

This exclusive benefit came in amongst many concessions already enjoyed by Dangote Industries to build its Refinery from the FG, CBN and Lagos State Government.

While reliable sources linked the gesture to Ms Usman’s personal relationship with Mr Dangote it remains unclear why the former NPA boss prioritised the billionaire’s interest above revenue generation for the Federal Government, which was her core duty. 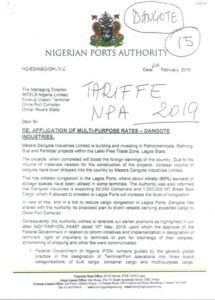