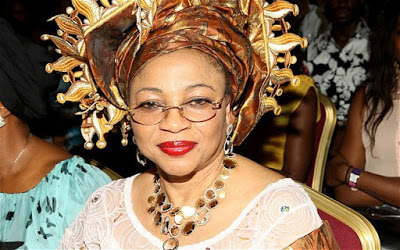 An operative of the Economic and Financial Crimes Commission, Ganiyu
Wasiu, on Monday told an Ikeja Division of the Lagos High Court how one
Vincent Ayewah, an employee of the Rose of Sharon Foundation, allegedly
connived with his friends and siblings to forge the identity card of the
foundation with different names to defraud the organization.

The Rose of Sharon is an organisation founded by Folorunsho Alakija
to empower widows as well give scholarships, up to the university, for
their children and orphans.

Mr. Wasiu, who works in the Bank Fraud Section of the Commission,
said Mrs. Alakija had petitioned the agency and had been invited to shed
more light on the incident.

“The letter of investigation activities were written to banks like Fidelity Bank, Stanbic IBTC bank and others,” said Mr. Wasiu.

“In view of that, other suspects were arrested for which they volunteered their statement under word of caution.

“A search was conducted in the house and premises of the suspects
including one Mr. George who is the maker of the forged identity cards.

“The forged identity cards and computer used were all recovered.”

Mr. Ayewah is facing a two-count charge of conspiring with his siblings and friends to steal N3 million from the Foundation.