Horrible! Lady posted she declined to go on a date with a married man, then this happened… (PHOTO)

So a Twitter user took to her Twitter page to rant about how she’s tired of married men in Lagos and little did she know that she was going to meet her nemesis after what she shared.

After @desolaa_ ranted about a married man who offered her lunch but she declined, so in order to win her, the man told her that his wedding band he was wearing, was just a ring and not a stigma.

Desola shared the tweet and then a lady interestingly called her out , accusing her of sending her husband nude photos during the last Sallah holiday. 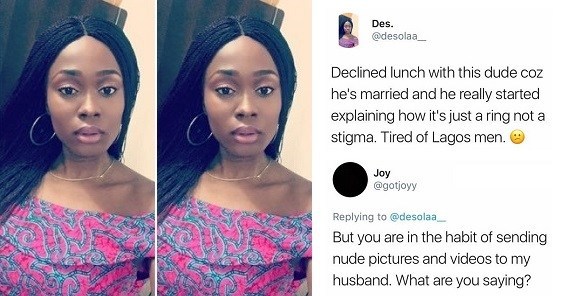