Former YBNL artiste, Adekunle Gold might be out with YBNL as his contract ended last December and it seems to be the end of their relationship
Adekunle Gold has deleted pictures of Olamide from his instagram and the YBNL logo is nowhere to be found in his Bio.
Adekunle’s relationship with Olamide is in question as the renewal of his contract that ended last December has not been announced.
The ‘Orente’ crooner allegedly posted Olamide’s newly released song just like others affiliated to the YBNL CEO. The tricky part? he deleted it hours later. 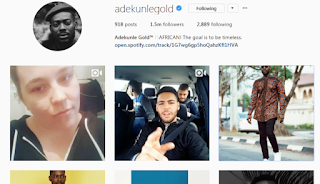 Buhari asked that he should be allowed to rest – Lai