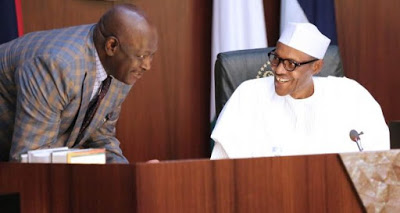 The Secretary to Government of the Federation (SGF), Babachir Lawal, hugged the limelight again Thursday for the wrong reason.

This time, the Senate Ad Hoc Committee on Mounting Humanitarian
Crisis in the North-East, led by Senator Shehu Sani, is alleging that
about 20 companies listed as having been awarded contracts under the
Presidential Initiative on the North-East (PINE), supervised by
Babachir, may be ghost firms after all.

“Now, we are set to invite all those persons. It was supposed to be today but, unfortunately, it could not happen.

“Meanwhile, you should understand that we are not investigating the
SGF alone; we are investigating contracts that were awarded under the
PINE. And over 20 companies were involved, but something very strange is
the fact that some of these companies involved in these contracts, we
cannot actually trace their addresses,” Sani said.

Expressing his probe panel’s frustration, Sani added, “We went there
but they were not there. The option before us is to either report that
they are ghost companies or we keep on searching until we find them. But
it is most likely that it will be easier for the camel to pass through
the eye of the needle than for us to find some of these names here.”

Sani spoke while addressing the media shortly after meeting with the
Senior Special Assistant to the President on National Assembly Matters
(Senate), Senator Ita Enang, at the end of Senate plenary.
Controversy had trailed Babachir’s failure to appear before Sani’s
committee on Thursday after being officially invited. Initial reports
had quoted him as saying that he would not honour the invitation because
he was seeking legal counsel on the appropriateness of the Senate
invite.

On Thursday, however, he sent a mail to the Senate expressing regret
at his absence and pleaded for time to appear before the probe panel.

There had also been wide reports in the media that the Managing
Director of Rhola Vision, a company allegedly owned by Babachir, and
said to be involved in the grass-cutting scam, turned down the Senate
invite on the excuse that he had traveled out of town and could not be
reached on phone.

But Senator Enang who was with Sani Thursday attempted to calm frayed
nerves, denying any rift between the Presidency and the legislature.

He said, “Let me also state that the executive has great respect for
the institution of the Senate and the distinguished senators themselves.

The anti-corruption war, a cardinal objective of the Buhari-led All
Progressives Congress (APC) administration has been subject of rave
reviews as concerns have mounted over alleged uncooperative attitude of
the executive arm of government to lend itself to investigations.