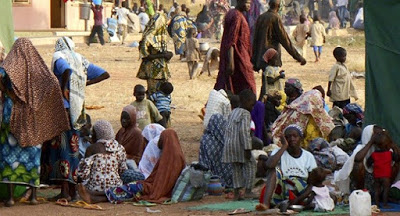 Niger State Governor,
Abubakar Sani Bello has commiserated with University of Maiduguri,
Internally Displaced Persons, IDPs and Borno state government over
recent twin-bomb attack in the university as well as the  accidental
air strike by the Nigerian Airforce,,NAF describing the incidences as
tragic.
The
Governor expresses his sympathy and heartfelt condolences to the
University community, the families as well as people and government of
Borno State over the incidents adding that the attack by a suspected
Boko Haram suicide bomber was really unjustified.
In
a statement issued by his Chief Press Secretary, Malam Jibrin Baba
Ndace, the Governor noted that the institution had been relatively
peaceful despite the countless attacks launched on its environs and
called on the university authorities to step-up security on the campus
to guide against future occurrence.
“Despite
insurgency, the University of Maiduguri has been relatively peaceful.
Indeed, in 2016, the UNIMAID had its 40th anniversary and combined
convocation which attracted people from all over the world.”
Governor
Sani Bello, who believes that the fight against the insurgents was a
collective responsibility of everyone, said government and the citizens
must not allow evil to triumph over peace and harmony of the society.
“There
is the need for the people to be extra-vigilant and to also assist the
security agencies with intelligence reports about, and expose suspicious
characters amongst us so that they can be proactively flushed out of
our midst before carrying out their nefarious activities”.
The
Governor further advised that the airstrike should not be seen to
undermine the gains recorded by the Armed forces and other security
agencies in the fight against the insurgents.
Governor
Sani Bello commiserated with the families of those who lost their lives
in the blast as well as those of the IDP camp and  prayed for the
reposed souls of the deceased and wished the injured quick recovery.
Reports
say four persons, including a Professor of Veterinary Medicine (Aliyu
Mani), were killed in the suicide attack that rocked the university at
two different locations while 17 people recorded various degrees of
injuries.
Previous Post