Girl killed dad because he refused her to bless her marriage

Emani Kure, a 16-year-old girl, has committed a horrendous act by killing her father in Abuja, the Federal Capital Territory.

The hapless man, 40-year-old Kusha Kure, met his untimely end because he opposed the desire of his daughter to marry a particular young man, and therefore withheld his consent to the proposed marriage.

Emani and her fiancé, Nasiru Musa, had been dating for about two years in Karavan village, Bwari Area Council of the Abuja FCT and had expressed the desire to marry.

Sunday Sun gathered from the police that the ugly incident happened on March 11, 2018 around 3:00am.

Commissioner of Police, Mr. Sadiq Bello, said that matter was later reported at the Bwari Police Division. On March 13, homicide detectives arrested Emanu and her mother, Asabe Kure, who she had claimed played a role in the murder. They were later transferred with the case file to FCT Criminal Investigation Department at the headquarters of the command.

In an interview with Sunday Sun, Emani made the shocking revelation on how the incident happened. She said: “I killed my father because he did not allow me marry my boyfriend, Nasiru Musa. We have been dating for two years. My father has beaten me several times, to stop me from marrying Nasiru. Around 3.00am on March 11, my mother told me while we were sleeping outside, to go into my father’s room where he was sleeping. She said that I should take his cutlass and kill him. I ran to where my father always keeps his cutlass and went to his room. I cut him on the neck with the cutlass while my mother held his leg. 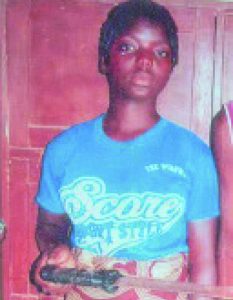 “After killing him, I ran away to the house of my friend, Regina. The incident was reported to the police at Bwari Police Division. Nasiru did not know that I wanted to kill my father. He was shocked when he heard that I killed my father.”

On her own part, 35-year-old Asabe, wife of the deceased, flatly denied the allegations made by her daughter. Narrating her story, she said. My late husband and I did not support my daughter, Emani to marry Nasiru Musa, her boyfirend. She refused to listen to us. My husband was sleeping in the room. My little baby started crying and I woke up to breastfeed her. Suddenly I heard a noise from my husband’s room. I called my father in-law. He and other people rushed to our house and saw my husband in a pool of blood. My daughter was not around; she ran away. I started to suspect her and Nasiru Musa as being responsible for my husband’s death.

“We went to the Bwari Police Division to report that my husband was killed in his room. I told the police that I suspected my daughter and her boyfriend. Later the police arrested Nasiru and my daughter. She confessed to the crime but claimed that I gave her instruction to kill my husband. I was not involved in killing my husband.”

Twenty-four-year-old Nasiru, who is accused of complicity in the murder case gave his account of what transpired: “I wanted to marry Emani Kure as my second wife. I already have a wife and we have one child. I have known Emani for two years. Her father did not agree to my marrying her. I didn’t know that Emani was planning to kill her father. I was not aware. I was shocked when I heard that Emani killed her father. I went on condolence visit to the family and even assisted in searching for her, before she was arrested.

“Emani confessed to the police that she killed her father and even said that it was her mother who instructed her to kill the father. I was shocked that the mother accused me of killing the husband. I didn’t have a plan to kill her husband.

The Deputy Commissioner of Police in charge of State Criminal Investigation Department, Mr. Mohammed Ciroma, who spoke with Sunday Sun, disclosed that detectives had recovered the cutlass allegedly used by Emani to kill her father.

Meanwhile, the trio of Emani, her mother and Nasiru are still in police custody as detectives continue with the investigation.

Send Buhari Packing For A Younger President in 2019 —IBB

Send Buhari Packing For A Younger President in 2019 —IBB