A final year student of Accounting, Osun State University, Okuku Campus, has allegedly disappeared into thin air after taking refuge at a police station in Lagos State. The student, Olayemi Joshua Olaniyan, 22, was said to have begged policemen at Ojodu Police Station, to allow him spend the night at the station because it was late. 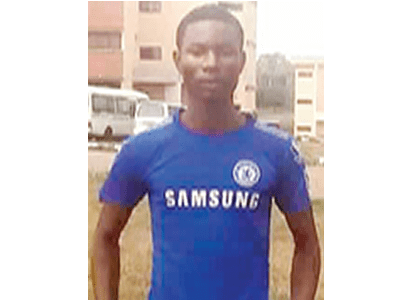 Immediately they granted his request, he called and told his friend of his location and situation. That was the last time anyone heard from Olaniyan. Olaniyan, a resident of Oshogbo, was said to have slept overnight at the station and since then, nobody knows of his whereabouts. According to Olaniyan’s aunt, Mrs. Rachael Folade, the final year student went to Ojodu Police Station, in Lagos State and explained to the officers on duty that he wanted to sleep over at the station. He told them that he would travel back to his school the following day.

She said: “The night before he slept, he called one of his colleagues, Oyin Adeyeye, who owns one of the documents that brought him to Lagos. He informed her that he would be staying overnight at the Ojodu Police Station. He said that the policemen requested for his name, his identity card and some other documents to make him identifiable, which he presented.”

The woman explained that Olaniyan, who travelled on February 28, was visiting Lagos State for the first time. She said: “He went to Lagos State to submit some documents at an ICAN Office in Lagos for his IT. He told his friend that by the time he was through, it was already late in the night. He decided to stay overnight in Lagos, and then to travel back to school the next morning. That was the last time we heard from him. On getting to the police station, the policemen denied having seen anyone, let alone someone that spent the night at the station. “We have been to the police station, and they threatened to arrest us.

They said we were disturbing them. We’re appealing to the general public to come to our aid. My nephew is a very quiet young man, who believed that police could assist him. We have been to ICAN and they confirmed that he came to the office and submitted the forms on behalf of other students. The question is how he could have said that he was at the Ojodu Police Station. The policemen have denied seeing him.” The state Police Public Relations Officer (PPRO), SP Chike Oti, said that Ojodu Police Station didn’t have record of Olaniyan spending the night at the station