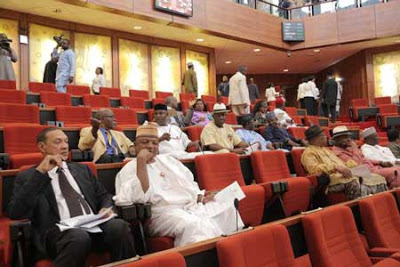 The lawmaker disclosed this
during a courtesy visit to the General Officer Commanding 8 Task Force
Division, Maj Gen Ali Nani in Monguno.

“We are here in your
office  primarily to thank you and salute the courage, determination and
the sacrifice which the Nigerian Army has made towards bringing peace
to our communities”.

Continuing, he noted  “We are eternally
grateful for the sacrifice that you people have made in liberating our
communities from  Boko Haram terrorists. It is because of your
sacrifice, dedication and zeal that we feel safe to come here today”.

He
stressed that  military personnel continually deprive themselves of
sleep and other necessities to ensure that other Nigerians sleep with
both eyes closed.

“Words cannot  express our gratitude enough
because so many military personnel have paid the supreme price in the
cause of defending their father land. I pray that the Almighty God grant
their souls peace.”

He assured the GOC that the National
Assembly will do everything within it’s legislative responsibility to
ensure that the NA gets a conducive environment to discharge it’s
constitutional duties.

In his response, Major General Ali Nani
thanked the Honourable  member for visiting the division. He assured him
of the preparedness of the division to completely rid it’s  Area of
Responsibility of Boko Haram’s influence.

“I want to say that
we are willing and ready  to keep doing our best to ensure that peace,
stability and economic activities resume fully North-East in general”.

The
GOC acknowledged the  support  of the state government and communities
within Northern Borno in  checking the menace of Boko Haram.

“In
the time past, the locals hardly  offer information, but now because of
their support and understanding, we get information concerning
terrorists and activities.”

He called on  other security agencies
in the state to come in and discharge their constitutional roles by
dominating  liberated communities to engender economic development. He
noted that Nigerian Army has within its limited resources ensured that
the liberated communities are provided with basic amenities.

The GOC observed that the intervention was part of
efforts to  cement existing cordial relationship with the public in
Monguno and environs  in order to enhance healthy civil -military
relations.
Please disseminate this information to the general public.