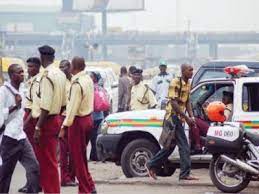 A family member and a colleague of a bus driver, identified as Ayobami, aka Ero, have denied that he set himself ablaze after his vehicle was impounded around 7 and 8 Bus Stop, Airport Road, Lagos State.

The aggrieved family and colleague, who spoke to our correspondent during a visit to the area on Wednesday, alleged that some government agents set Ayobami ablaze.

A colleague, who identified himself as Adeola, said he was conveying passengers to a destination when the incident happened, adding that he saw the state officials impounding vehicles at the bus stop.

During the enforcement, Adeola explained that one of the area boys working with the task force dragged the steering with Ayobami, who refused to release his vehicle.

In a desperate attempt to impound the vehicle, the eyewitness said the area boy reached for petrol, poured it on Ayobami and used a lighter to set the father of two ablaze.

“It was when the area boys were switching on and off the lighter that the fuel attracted the fire and his body started burning. Even the area boy who was dragging with him at the front seat quickly jumped down and fled alongside the task force officers.”

PUNCH Metro gathered that the victim, who sustained serious burns in the face, chest, stomach, back and arms, was rushed to the Lagos State University Teaching Hospital, Ikeja.

A relative, who identified himself as Baba Roqeeb, confirmed Adeola’s account of the incident, adding that doctors were battling to save Ayobami’s life.

He said, “Immediately he got burnt, his conductor, Rotimi, called me. But when I rushed to the scene of the incident, I was told that they already rushed him to Makinde Police Station.

“I quickly rushed down there but was told they already left for the task force office at Bolade, Oshodi. When I got there, the policemen detained me in a cell when they knew I was there because of Ayobami.

“I asked why they detained me, but they said they heard we were trying to burn the office like it happened during #EndSARS. They released me when they needed a family member to accompany him to a hospital.”