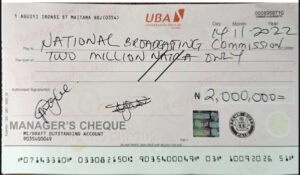 Arise TV has accepted and paid the N2million fine slammed on it by the National Broadcasting Commission (NBC) for airing a fake news on the presidential candidate of the All Progressives Congress (APC), Asiwaju Bola Tinubu.

The TV station ran a story that the Independent National Electoral Commission (INEC) was investigating Tinubu over a court case in the US, a claim which was later denied by the electoral body.

This caused the NBC to slam a fine of N2million on the TV station for breach of the Nigerian Broadcasting Code.

In a letter to the Director General of the NBC, Balarabe Ilelah by Arise TV General Counsel and Legal Adviser Ebunoluwa Awosika, the station said it accepted the fine for its error. 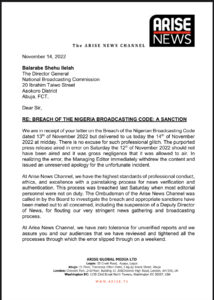 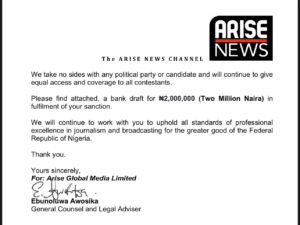 It also said all erring officers had already been punished, while also attaching the evidence of the payment of the N2million fine.

TINUBU: A CAT WITH MANY LIVES. By Kassim Afegbua.

TINUBU: A CAT WITH MANY LIVES. By Kassim Afegbua.