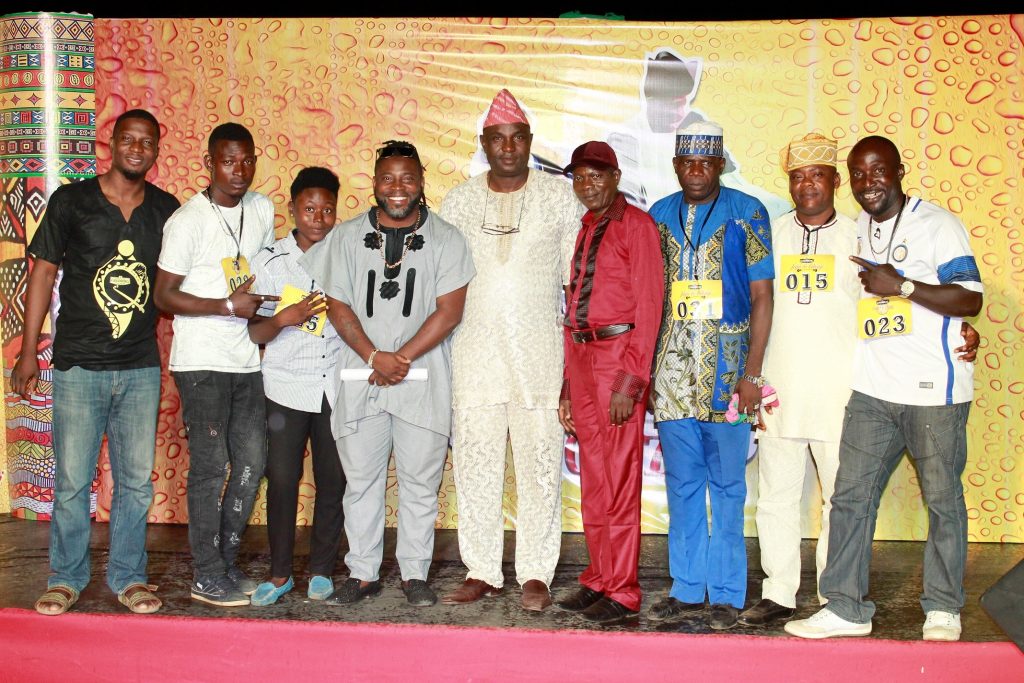 PHOTO CAPTION: (Middle) Photo shows Puffy Tee, SK Sensation and Michael Adedayo, judges with the five selected winners to the Quarterfinals of the ongoing Ariya Repete, a talent hunt for Fuji and Juju upcoming artist. With them is Josiah Akinola, Assistant Brand Manager, Regional mainstream brands, Nigerian Breweries Plc. (First from left)
Ten artistes have been selected for the quarter finals in Ilorin and Ijebu Ode, with five from each location in the ongoing Ariya Repete auditions held in both cities on April 26 and 28, 2017.
In each location, three Fuji and two Juju artistes with the best performances were selected by the independent panel of judges from ten contestants that were chosen from the audition.
The Fuji artistes that were selected in Ilorin are Morufu Alujo, shola Adeola and Onumama Fausiya while Omolewo Oladele and Yomi Johnson made it in the Juju category.
In Ijebu Ode, Wale Adebisi and Adenike Omoruyi emerged from Juju category, while Omotola Ayinde, Alausa Akande and Oniseesi Afeez were selected from the Fuji category.
Commenting on Ariya Repete, Fausiya, a female Fuji artiste in Ilorin said she would like to clinch the grand prize and also be a good ambassador of Goldberg.
“I commend Nigerian Breweries Plc on this laudable initiative.With Ariya Repete, my dreams will be actualised, as well as the aspirations of other local artistes in the Southwest,” she said.
The artistes will compete at the quarter finals slated for June 30th in Akure with winners from Ilorin, Ijebu Ode, Oshogbo, Abeokuta, Ado Ekiti and Lagos.
The semi-finals will take place on July 7th in Abeokuta with the grand finale scheduled for July 14th in Ibadan, Oyo State.
At the grand finale, a winner, each for Fuji and Juju will emerge with each clinching a grand prize of One million Naira (N1, 000,000) and a recording deal.
According to Emmanuel Agu, Portfolio Manager, Mainstream Lager and Stout brands, “the brand is using the new platform to extend its drive to discover new talents in the two indigenous Yoruba music genres and the move is in line with its commitment to promote the culture and tradition of the people of South West Nigeria.
He said other cities slated for auditions are Oshogo, Abeokuta, Ado Ekiti and Lagos.