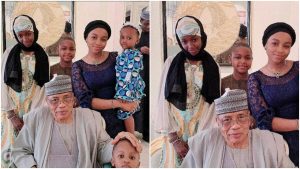 Rahama Indimi, estranged daughter-in-law to Nigeria’s former Head of State, Ibrahim Badamasi Babangida had erased the children of her ex-husband’s second wife in a group photograph of IBB celebrating Eid with all his grandchildren.

Rahama who posted the manipulated image on her Instagram handle @Rahma_YI with the caption, “Barka da Sallah from mine to yours,” carefully doctored the shot in such a way that only her own children with her ex-husband, Mohammed Babagangida, featured in the photo with the former Military ruler.

However, Arewa Agenda has exclusively obtained the original photo where the two Children of Mohammed’s new wife, Umma, were part of the authentic Sallah celebration image.

Recall that the 14-year old marriage between Mohammed Babangida, scion of the Babangida dynasty and his first wife and mother of his four children, Rahama Indimi, had crashed in 2016 as a result of myriads of problems according to multiple sources.

Rahama is a daughter of Maiduguri-based billionaire Mohammed Indimi and whose son is also married to a daughter of President Muhammadu Buhari.

In November 2018, Rahama had taken to Instagram to accuse her ex-husband, Muhammad Babangida, of using money to secure full custody of their children.

The billionaire’s daughter who had her kids taken from her since separating from Mohammed Babangida, said she would continue to fight till her last breath.

After his divorce from his first wife, Mohammed had in October 2019 at the Eko Hotel, Victoria Island, Lagos venue of the 60th birthday party of Hajia Bola Shagaya had for the first time, stepped out of a major social event with his second wife, Umma. They posed for photographs wilfully and stopped to greet virtually all the dignitaries at the party with Mohammed gleefully doing the introductions.

Arewa Agenda (https://arewaagenda.com/) is a Publication of Young Writers from Northern Nigeria towards Peaceful Coexistence and National Development through positive narratives.