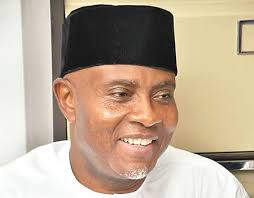 Like any competitive sport, politics is sustained by keeping to the rules and being gracious towards competitors. It also feeds on loyalty to leadership and followership. In this write up, it will be pertinent that I don’t address Osaro Onaiwu as an “Earl”. This is because with that name, which is associated with nobility in the great United Kingdom, Osaro Onaiwu had, for so many years, dressed himself in a borrowed robe.

The story of how he came by that name, to some of us who know his pedigree right from his Ikeja heyday when his reputation was suspect on account of his involvement in some sleazy deals, is blowing in the wind. And, because the name-“Earl”-was borrowed, Osaro Onaiwu has not been able to either exhibit the virtues of the name or keep fidelity to the nobility of it.

Having failed abysmally on several occasions to live up to the billing of that name, I am at no pains at all to just refer to him, in this write-up, as Osaro Onaiwu-the scoundrel. And, I challenge him to prove otherwise.

It is granted that the practice of denigrating opponents ultimately is a zero-sum game that nourishes desperation and a win-at-all-cost mentality; and, where losers resort to scorched-earth tactics, leading to an atmosphere in which governance becomes an exercise of trying to find a needle in a haystack.

I am saddened to see that Osaro Onaiwu, who failed awfully in business and had also contested for the governorship seat and failed on the number of times he did, and who was never castigated for doing so and had even benefited so much from very prominent sons of Edo, is engrossed in an odious pastime of casting aspersions on well-respected Edo leaders who tower above him in honour, dignity and integrity.

Specifically, Osaro Onaiwu’s recent outburst against my mentor and elder brother, Captain Hosa Okunbo, tantamount to crossing the line. He had also taken misguided swipes at respected lawyer and former member of the Federal House of Representatives, Hon. Ehiogie West-Idahosa for no just cause. I have yet to see anywhere in which the recent activities of Capt. Hosa Okunbo and Hon. West-Idahosa had directly touched on the person of Osaro Onaiwu to necessitate his unconscionable assaults on these leading lights of Benin Kingdom.

These prominent and highly respected Edo sons have attained the zenith of their endeavours in life and deserve to be respected. There are many others who are also in that category. But my main concern is Capt. Hosa Okunbo that Osaro Onaiwu had gleefully clobbered for whatever reasons. I have taken it upon myself to respond to Osaro Onaiwu because he had not only shown how hateful and envious, he is of Capt. Hosa but also how ungrateful he has been to the man who had shown him brotherly love.

For instance, it is public knowledge that Capt. Hosa sponsored Osaro Onaiwu’s son’s wedding in 2015 and had also patronized his failed public relations company, RED CARPET, on several occasions. Capt. Hosa also contributed to the medical bills of his late brother, Dr Onaiwu, when he was critically sick. I challenge Osaro Onaiwu to debunk my assertions.

I am not done yet. Capt Hosa played a major role in Osaro Onaiwu’s father’s burial as can be attested to by his family and, in addition Etinosa, his brother had also worked for Captain Hosa during the construction of the Wells Carlton Hotel in Abuja for about three years. I am very much aware of what happened then and how Osaro Onaiwu came to beg Capt. Hosa on behalf of his brother for his misdemeanor for which Capt Hosa had to forgive his brother. I take personal responsibility for divulging these facts without recourse to my elder brother and mentor, Capt. Hosa, who keeps persuading us not to join issues with some of these fellows.

Could Osaro Onaiwu’s irrational attacks on Capt. Hosa just be about politics? Or could they just be an avenue to actually express his unmitigated envy towards a man that had consistently shown him love and compassion? Or could they just be that God has allowed forces greater than him (Osaro Onaiwu) to use him in propagation of acts of ingratitude to really show that he is indeed an ungrateful wretch, unknown to Capt. Hosa?

Having contested for the governorship position several times and failed, that Osaro Onaiwu would now go as far as attempting to maliciously malign Capt. Hosa, et al, these highly respected great sons of Edo whom he had, one way or the other, benefitted from, is completely unacceptable. Honor should be given to whom it is due. Capt. Hosa deserves honour. Other well-meaning leaders of the great Benin Kingdom deserve honour.

That a man of Osaro Onaiwu’s supposed standing would choose to throw caution to the winds over a political game in which he isn’t a player, let alone a frontline player or even the umpire is worrying. For a man who has been a beneficiary of the political system of the state and the eleemosynary acts of Capt. Hosa to begin to throw insults against him and other prominent Edo sons is a good reason for well-meaning stakeholders in the state to pause and reflect on the direction in which “the heartbeat of the nation” is headed. It shows that some persons like Osaro Onaiwu have lost their moral compass.

If the current situation in the State, characterized by a seemingly intractable progression in error by some individuals, including Osaro Onaiwu, continues, then, it does appear that the next election in Edo State could be a victim of desperate manipulation by those who want to hold on to power in spite of their abysmal performance in office in the last four years. But I am rest assured that the good people of Edo State, through their eternal vigilance, would put them and their collaborators, like Osaro Onaiwu, to shame.

Whereas, politics must be a contest of ideas to win the people over to the platforms that best represent their aspirations and paint a better future for them; the good people of Edo State deserve better leadership. It is sardonic of what they claim to stand for if persons, such as Osaro Onaiwu, are not taking the lead in elevating the quality of politics being played in the state.

In his supposed exalted position, Osaro Onaiwu ought to be calling erring youth to order instead of choosing to walk the path of maligning others for cheap points or recognition.

The people of Edo state do not need a heated polity ahead and after the scheduled September 19, 2020 governorship election. Persons like Osaro Onaiwu must consciously and consistently commit themselves to ensuring that the decibels of the drums of war are either drastically reduced or completely eliminated.

Elections will always have winners and losers, but the challenge before the people of Edo state is to unite across party lines to develop the state after the ballots have been cast and the new government sworn in.

A situation where elders of the state, in positioning themselves for personal gains and promotion of parochial interests, choose to act like bulls in a China shop at a critical political intersection in our State’s political evolution is unfortunate. We sincerely do not deserve it and the political shenanigans being promoted at the expense of our commonwealth and destiny of our teeming youth population must stop.