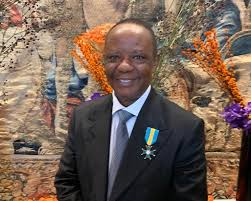 Our attention has been drawn to a malicious and spurious publication by a one-man blog (nurajos.blogspot.com) on alleged schism in the board of OMSL over alleged mismanagement of $18m (Eighteen million dollars).
In the said write-up, the faceless hack mischievously alleged that our chairman, Capt Idahosa Wells Okunbo, had taken possession of the said sum from NNPC, and squandered it in alleged bribery of National Assembly members and presidency officials over the squabble with Nigeria Ports Authority on the SAA issue.
Ordinarily, we would not have dignified the faceless writer with a reply, but in the interest of unsuspecting members of the public who may be swayed by deliberate falsehood and for record purposes, we are constrained to put out this press statement
1. The write-up is totally false in every material particular.
2. No payment of $18m dollars or any such payment was received by OMSL or our Chairman, Capt Hosa Okunbo
3. No bribe was paid to National lawmakers or presidency officials in respect of SAA issue with NPA by OMSL or our chairman.
4. The concocted story could only have been in the warped imagination of the writer and his sponsor(s)
5. We believe the write-up is politically motivated to smear the reputation of our company and our chairman.
6. There is no division whatsoever in the directorate and management of OMSL.
SIGNED
1) Admiral Ameen Ikioda (Rtd)
2) Mr Garth Dooley
3) Admiral Joe Aikhomu (Rtd)
4) Mr Kunle Oyekunle